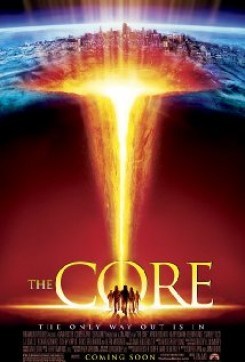 Dr. Josh Keyes (Aaron Eckhart) discovers that an unknown force has caused the Earth's inner core to stop rotating. Dr. Keyes, along with a team of scientists, travels into the Earth's core to detonate a device that will reactivate the essential gyration and save the planet.

Attack of the Pigeons:

A combination of real, taxidermy, animatronic, and computer generated pigeons were used for the scene where it appears as if the pigeons attack. As the crew set up for the shot, they scattered some food around on the ground and after release, the pigeons naturally flew to the food and began to eat. After a large number of birds had gathered, a crewmember made some noise and the birds took flight. This footage along with some computer images, helped make it appear as if there were many more birds than there were once the scene was seamlessly enhanced in post-production. The birds that smashed into things were fake, animatronic, taxidermy or computer generated. The post-production group created the final illusion and integrated all the different elements.

The scenes of the pigeons on the statue and attacking the bus were filmed separately and in front of a green screen. Some pigeons had their wings taped so they couldn't fly very high. A trainer placed those birds on the statue and scattered some food around. Then the trainer stood off camera and clapped his hands to make a loud noise cueing the birds to fly off the statue. A few live pigeons were placed inside the bus. The director wanted the birds to flap around so it would appear as if they were attacking. Trainers clapped their hands and tried to make loud noises, but the birds didn't seem to be effected by this. It was decided later in post-production to add some computerized images of pigeons inside the bus for the needed chaos.

An animatronic bird doubled for the live bird when the scene called for a bird to smash into the windshield of the bus. The glass in the windshield was prop candy glass. All of the live birds were homing pigeons and were banded for identification. One day of shooting was in a closed room in front of a green screen. Platforms of various sizes were built and secured around the room as landing surfaces for the birds. Once again food was scattered around. Trainers released the pigeons and the camera filmed them naturally flying around and landing on the ground and platforms. All of the birds were retrieved safely and the post-production crew was able to use this footage to make it appear as if the birds were outside attacking people, buildings, and other objects.

In one scene, a man holds a white mouse by its tail and sets it inside a box, which has wires attached to it. After closing the box and turning it on, a light appears coming from inside the box. The box is opened and the mouse removed. Six mice were on call for this scene, proving once again there are no small parts, only small actors! Although it appears the box is connected to wires, there was no live electrical current. The actor held the mouse carefully by the tail, set it into the box, and removed it immediately. When the light is seen shining through the box, it was empty. Right before filming began, the trainer set the mouse inside the box and the actor opened it and lifted the mouse out by its tail. The trainer retrieved the mouse and it was given an edible reward.

In a Feline Flash

A cat is lying on the ground by a food bowl when it looks up and growls. Then we see a flash from an electrical charge and the cat runs off screen appearing to be spooked by this bolt of electricity. A trainer placed the cat on its mark, stood off camera holding up a toy to get it to look in certain directions, and cued the cat verbally to run off camera. The growl and the electrical bolts were added later in post-production.

As the ship is traveling under ground, the camera takes us up onto the sandy desert and we see the sand ripple under the feet of a man standing with two camels. The camels look at the man who is just as puzzled as they are. Trainers placed the two camels, Mariah and Norton, on their marks. These two animals knew each other and were very comfortable hanging out together for the scene. A trainer handed the actor the ropes of the camels and another trainer stood off camera with a squeaky toy to get the camels to look in various directions. Two other trainers hid on the side of the camels and touched their feet hoping to prompt the animals' foot movement. Neither camel appeared to mind having their feet touched, nor did they move their feet. The ground remained perfectly still as this scene was being filmed and the ripples in the sand were, you guessed it, movie magic!

A Whale of a Tale

As the ship goes underwater, there are whales swimming nearby. Some swim by a few fish that are floating and appear to be dead. Computer artists created the whales and the dead fish.