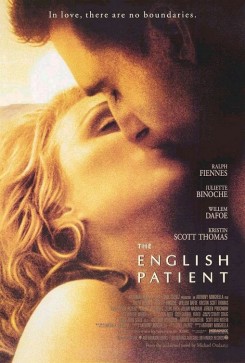 The English Patient is a film about a World War II pilot, who is bedridden in an Italian hospital, after being burned beyond recognition when his plane was shot down. While awaiting his death, he drifts in and out of memories as he try's to piece together his life and who he was. What he remembers is a great love affair he had with a British aristocrat's wife and the tragedy that transpired because of that affair.

In the opening scene a few camels are seen being loaded with supplies and then ridden across the desert. Then a dog is seen in the street near a military vehicle and a donkey is seen walking through the city as they are being led with a rope. A goat is seen in a village and some crows are seen eating something on the ground and when an actor approaches they fly off. A moose is also seen with a fly on his head. All of the animals in the film were locally owned and their owners were responsible for the care and welfare of their own animals.