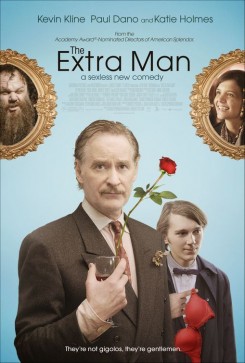 A young aspiring writer moves in with an eccentric middle-aged Manhattan man who escorts wealthy older women. The two men slowly reveal each other's quirks and form a unique bond.

Henry (Kevin Kline) holds a Yorkshire terrier in his arms and proceeds to rub the dog all over his suit and under his legs. Trainers instructed the actor how to properly hold the dog so it was safe and comfortable. The dog was very well-rehearsed and unfazed by the action. The actor exaggerated the action to make it appear as if he was pressing the dog against his body, when really, he barely touched the dog to his clothing. All grounds were inspected for hazards and sets were closed off and secured.

The pigeons seen in various outdoor locations were mainly filmed in their natural habitats and allowed to do whatever came naturally (including eating the food the actors threw them), except for the ones outside the church after the wedding scene. Those were "actor" pigeons owned by trainers and accustomed to being on a movie set. Their flight feathers had been clipped so they could not accidentally fly off, and seed was placed on the ground for them to peck at during this brief scene. Streets were closed to traffic, and trainers stood nearby to retrieve the birds right after filming.