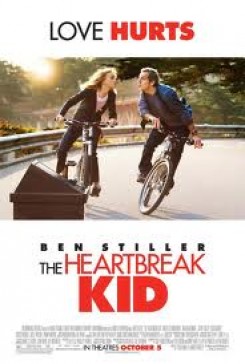 Commitment-phobic bachelor Eddie (Ben Stiller) meets his dream girl Lila (Malin Akerman). While the two are on their honeymoon, however, Eddie discovers that Lila isn't right for him after all, and he spends his honeymoon pursuing another woman (Michelle Monaghan) behind his new bride's back.

While Eddie (Stiller) and Miranda (Monaghan) ride a Ferris wheel, a man on the ground holds a miniature horse by a lead rope. For this, the costumed horse owner stood holding his miniature horse, Charlie, on a lead rope. The horse was accustomed to both the man and the environmental noises and distractions.

A couple of children show Miranda several puppies on the ground. She picks one up and holds it in her arm. While she is petting the puppy, Eddie approaches, holding and petting a large rat. When he finally realizes that it is a rat and not a puppy, he drops it. The cast and crew were introduced to the animals and were instructed on their proper handling before filming began. The actors were comfortable with the animals. For the action with the rat, the actor was handed the rat moments before filming. When he was required to drop it, he dropped it gently onto a padded stunt mat. Camera angles made it look like the actor dropped the rat from the level of his chest to the ground, but it was actually a short drop — approximately 8 inches. Trainers then cued the rat to run across the dirt road and into a box just out of frame.

In a theater tent, a donkey with a prosthetic penis stands on its hind legs, with its forelegs up on a burlesque dancer. For this scene, a well-rehearsed donkey was positioned onto a small stage a couple of inches off the ground. The donkey was fitted with the prosthetic, which was strapped over a blanket on its back for comfort. A costumed trainer held the donkey by its lead rope during filming. Trainers placed the donkey up on its hind legs and positioned its front legs on the actress. Cameras rolled for only a few seconds, and then trainers immediately set the donkey's front legs back down.

Whenever seagulls or other birds are seen walking or flying near the shoreline or harbor, these birds were filmed naturally in their own habitat.

American Humane did not monitor some of the dog action on the beach, the Portuguese man-of-war scene, or the donkey smoking a cigarette.

The Heartbreak Kid does not carry the "No Animals Were Harmed"® disclaimer at the end of the film because the production did not give American Humane a pre-release screening of the film, which is one of the requirements for issuing the disclaimer.