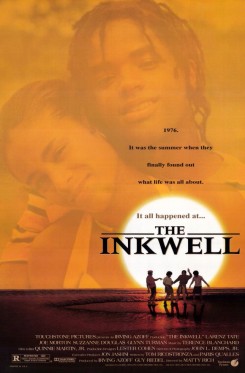 Set in the summer of 1975, The Inkwell is the story of sixteen-year-old Drew and his experiences of growing up while on vacation with his parents. Drew is less than thrilled about the vacation plans that his parents have made to go to Martha's Vineyard to visit family. But he figures that it may not be too bad, as he has a cousin there about the same age. They arrive at his Aunt's house and the boys are immediately off on various adventures, most of which involve trying to meet girls. The boys make a bet between themselves to see who will get a girl first, and the race is on. They both try too hard to impress girls they meet and get nowhere. Drew meets an older woman at a market and becomes smitten with her. He follows her home only to find out that she is married. Not only is she married, but she is married to an abusive husband whom Drew has seen on many occasions at the local motel with several different women. Later, through a series of trials and errors, Drew ends up spending the evening with this woman and things will never be the same again for this young boy, now a young man.

Animal action is minimal. In one scene Drew and a young girl are swimming down at the docks. Drew submerges into the water and emerges with a large lobster. He proceeds to chase the girl down the short pier with it. This was a fake lobster, provided by the props department. Seagulls are also seen in two background scenes.