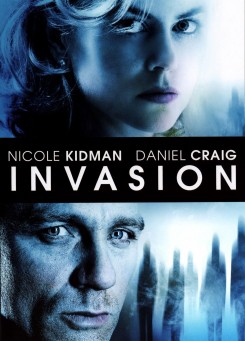 The space shuttle crashes, revealing an unfriendly extraterrestrial life force amidst the wreckage. Psychiatrist Carol Bennell (Nicole Kidman) and her colleague (Daniel Craig) are on a mission to protect themselves from these alien intruders, who attack their prey while it sleeps. Bennell needs to fight to stay awake until she can find her son, who might just hold the secret to stopping the invaders.

Oliver (Jackson Bond) and some friends go trick-or-treating. As they approach a house, they see a dog barking at them through the window. A man opens the door and holds the dog by the collar as it barks and growls at the kids. The dog gets away from the man and runs out of the house, chasing the children and knocking one child down. The child uses both hands to hold the dog's mouth shut until the man runs up and pulls the dog off by its collar. This scene was filmed in separate shots. A trainer brought the dog inside the house and put it on its mark near the window. Another trainer stood outside the window and verbally cued the dog to bark. When the front door was opened, the actor stood in the doorway as the off-screen trainer called the dog to come to the doorway and cued it to bark and growl. The actor then grabbed the dog's collar as the off-screen trainer continued cueing the dog to make noise. The actor mimed his lines so as not to interfere with the trainer's cues to the dog. The dog was released from the doorway and called to an off-screen trainer while the children walked away from the house. This was later edited in post-production to make it appear as if the dog were chasing the children. A stunt double dressed as the little boy put the dog's favorite toy into the neck of the Halloween costume he was wearing. A mat was placed on the ground nearby. One trainer released the dog and cued it to run to the stunt double and get the toy. The dog jumped up on the stunt double, who fell to the mat as the dog searched for the toy. The child actor was then placed on the ground and cued to hold the mouth of a fake dog head. A wound and blood on the child were nontoxic makeup.

As Carol (Kidman) and Oliver (Bond) are being chased in one scene, they run down an alley and some birds fly into the air. These birds were filmed naturally in their habitat as the actors ran down the alley.

In one brief scene, a white poodle standing in the street runs to a sidewalk. Alex, a five-year-old standard poodle was used for this scene. The dog was placed on its mark by a trainer. Another trainer standing off-camera called to the dog, who happily ran to him. The street was closed off to traffic, and the grounds were inspected ahead of time to make sure they were safe for the dog to run on.

As Carol crosses the street, she passes a woman walking a dog on a leash. The owner of this dog doubled as the actor in this scene. The street was closed off to traffic, and the grounds were inspected ahead of time.

Production provided documentation that a dead dog seen in the film was a prop. American Humane monitored some other scenes with dogs but they were cut from the theatrical release.