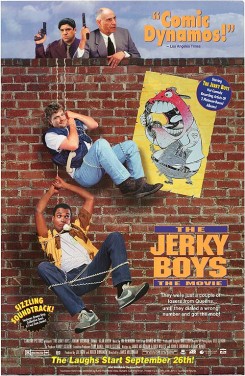 The Jerky Boys is a comedy about two jobless pranksters from Queens, New York, who attempt to get ahead by getting involved with local gangsters. As mischievous children, Johnny and Kamal were always making prank phone calls that landed their peers in trouble. As young adults, they are unemployed, living with their parents and still making prank calls. The duo decide to infiltrate the local mob operation and pose as hit men from Chicago. The ruse works at first, but soon their real identity is exposed and they become targets for the mob. In an attempt to save themselves, they call upon their only skill, pulling pranks. In a scheme to expose the mob boss to the police, they discover that the police are actually working with the mob and there is no way out for them. But, being the pranksters they are, they manage to divulge all the corruption to the press, save themselves, land jobs and get nicknamed "The Jerky Boys."

Animal action is extremely simple in this film. In one scene where the police and the mobsters converge on Johnny's house to capture the boys, the mob boss discovers that Johnny's old Uncle Freddy is actually the mob boss from his childhood, Don Frederico. In flashback we see the current boss as a boy in Italy. He stands along a road waving as the Don drives by waving from a decorated donkey cart. An actor in costume holds the harness of the donkey and leads him slowly along the road.