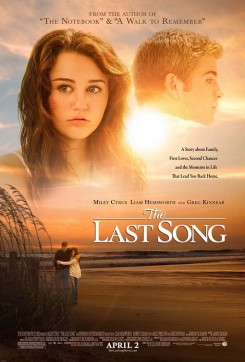 A drama centered on a rebellious girl who is sent to a Southern beach town for the summer to stay with her father. Through their mutual love of music, the estranged duo learn to reconnect.

Raccoon A raccoon is seen digging in the sand (as if digging for sea turtles), sitting, walking, running and standing on its hind legs. The raccoon used in this film normally performs at the Universal Studios Theme Park live animal show, so it was very comfortable on set and accustomed to these trained behaviors. Cast and crew were limited and all grounds were checked for safety ahead of time. A trainer placed a strawberry inside a plastic egg and then hid it in the sand, cuing the animal to go dig it up. No sea turtles were present. A trainer also held up a bait stick to get the raccoon to stand on its hind legs. Aquarium Will (Liam Hemsworth) dives inside an aquarium with fish and turtles, and then pulls Ronnie (Miley Cyrus) in with him. Later during a montage, we see the couple in diving gear swimming in the tank again. These scenes were filmed at the Georgia Aquarium in Atlanta. The cast and crew were given detailed instructions on how to achieve this scene. Safety divers were always in the aquarium with the actors. The divers held up pieces of plastic PVC piping to deter the sharks from coming near the actors. This tank often has divers swimming in it, so the fish and other animals were accustomed to the humans. Sea Turtles Baby sea turtles hatch on a beach and walk to the sea. The Georgia Department of Natural Resources (DNR) was present for the hatching and releasing of these 30 sea turtles. Every year, the DNR supervises the hatching of sea turtles and their journey out to sea. The production accompanied the DNR during this annual hatching and captured it on film. The crew was instructed to not intervene, except for the lead actress, who handled the turtles with extreme care, under supervision.