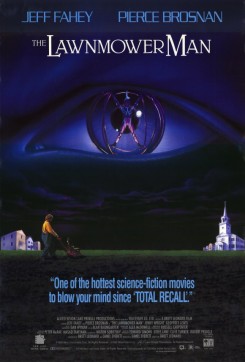 The Lawnmower Man is a science fiction thriller based on a short story by Stephen King. The story concerns a scientist who uses drugs, computer simulations and a high tech computer phenomenon known as virtual reality to heighten and increase intelligence. Virtual reality is an audio/visual experience that recreates reality electronically through a special mask and gloves and involving 3-D imagery and sensory electrodes. Larry, the scientist, conducts his experiments at first on chimps but then decides to secretly use a retarded man. The man, Jobe, mows lawns for a living and has an innocent and loving nature which some people abuse. As the secret experiments continue, a metamorphosis occurs within Jobe, and he seeks revenge on his abusers with horrendous consequences. By the time Larry realizes the magnitude of the monster he has created it is too late.

Most of the animal action originally filmed using the chimp has been cut and there is very little animal action left in the completed film. In the few remaining shots a chimp can be seen wearing a helmet, several chimps can be seen in cell-like cages, and there is a scene where a chimp escapes by reaching through the bars of his cage and turning a key that has been left in the lock. The cage/cells were only two-sided and the trainer simply told the chimp to reach for the key and turn it. The door was not actually locked and opened easily. From the chimp's point of view you can see him running down the laboratory corridors where he is supposedly shot. The shooting of the chimp is not shown on screen but is merely referred to in dialogue.