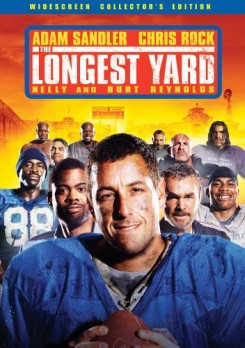 Former pro quarterback Paul Crewe (Adam Sandler) was quite the football superstar in his day. But when a drunk-driving conviction sends him to prison, Paul learns his new life in lockdown includes an annual football game pitting the inmates against the prison guards. While Warden Hazen (James Cromwell) relishes the prospect of a major sports hero losing a fixed game to his police squad team, Paul has other plans for this very interesting match.

American Humane's Film & Television Unit did not monitor all the animal action in this film. The Longest Yard is a Screen Actors Guild (SAG) production, and therefore it was required to provide American Humane's Certified Animal Safety Representatives on-set access whenever animals were used. However, due to limited resources and/or scheduling conflicts, American Humane's Film & TV Unit was unable to directly supervise all scenes in which animals appeared.

Paramount Studios did not provide the Film & TV Unit with a pre-release screening of The Longest Yard, and since American Humane could not witness all the animal action firsthand, the film has received a Not Monitored rating.

American Humane's Certified Animal Safety Representatives monitored only the crowd scene in front of the football stadium, which featured one mounted police officer and two others leading K-9 officers on leash. A wrangler stepped in for the actor on horseback and two extras dressed in uniform walked their own dogs in this brief scene.

American Humane monitored no other animal action in this production.