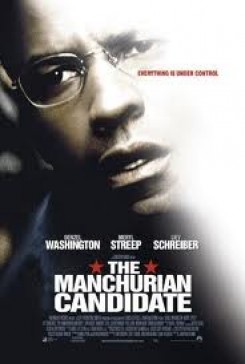 In this remake of the 1962 thriller, two soldiers returning from the Persian Gulf War were kidnapped by the enemy and brainwashed to become political pawns once they return home. Years later, Captain Marco (Washington) becomes aware of the plot and tries to stop his army buddy Raymond Shaw (Schreiber), now a candidate for vice president. Meryl Streep reprises Angela Lansbury's Oscar-nominated role as the powerful and controversial Eleanor Prentiss Shaw.

For scenes featuring horseback riding, the actors received riding lessons as well as general instructions on how to handle the animals before filming began. Actors rode under the watchful eye of four off-camera trainers, and all of the grounds were checked and cleared of any debris beforehand by wranglers and crew members as well as American Humane's on set Animal Safety Representative.

For one shot, a dog walks on leash with the actor as they tour the grounds of a mansion. The trainer put a collar and leash on the dog and handed it to the actor right before the camera rolled. In another brief scene, a dog runs by in the background during the actors' dialogue. One trainer released the dog and verbally cued it to run to a second trainer waiting with a treat at the end mark.

One scene takes place in a research lab setting with Capuchin monkeys and a chimpanzee inside cages. Some of the monkeys appear wearing metal skull caps; these caps were props, as were the machines, syringes, IVs and all other equipment in the laboratory. The stainless steel cages were thoroughly checked out and secured by trainers; to make it appear as if the lab housed many monkeys, crew members placed stuffed animals in the background cages. Toys and treats placed inside the enclosures helped occupy the animals during this sequence, and several trainers stood just off camera to supervise and retrieve the monkeys when the scene wrapped.