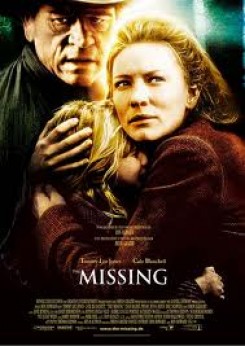 After a decades-long absence spent living with an Apache Indian tribe, estranged father Sam Jones (Tommy Lee Jones) returns home to find his adult daughter Maggie (Cate Blanchett) living in the desolate wilderness with two girls of her own. Though at first Maggie refuses to forgive her long lost father, she must seek out his help when a psychotic Native American "witch" called Chidin kidnaps Maggie's daughter Lily (Evan Rachel Wood) and plots to sell her in Mexico along with several other kidnapped teenage girls.

Several scenes involve horses and include some intense falls and activity. The film includes mild to moderate animal action concerning coyotes, an owl, a hawk, a tortoise, and some chickens and cows.

This film includes lots of horse action, with some scenes more intense than others. All of the actors had riding lessons before filming began, and the trainer matched horses to each actor according to their riding abilities. Whenever possible, a stunt rider doubled as the actor and trained stunt horses were used. Trainers and crew members thoroughly checked water areas and all trails for any debris or holes before allowing the horses on set. Expert wranglers on horseback acted as pick up riders in case any horses decided to wander off. Special weather effects included wind, rain and lightening machines when the film called for it. Both horses and riders practiced with all three machines prior to filming to insure the comfort of all involved. The experienced camera crew used various angles to make the trails and other action appear more intense or strenuous than it really was.

Brake (Aaron Eckhart) rescues a calf after he sees its dead mother surrounded by two nearby coyotes. Brake scoops up the calf and clenches it as he rides his horse. The props department supplied a specially constructed saddle for the calf's comfort, and a trainer rehearsed with the actor and calf numerous times before filming began. The actor rode at a slow pace and two trainers on horseback rode alongside him just out of the camera's view. After completing the scene, a trainer carefully lifted the calf off the horse without incident. Two trainers placed the coyotes on their mark and stood off camera holding an unseen rope attached to the animals. The coyotes were filmed separately without any actors present and edited into the film during post production.

Sam, Maggie and Dot ride on a steep canyon trail one night in search of Lily and the other kidnapped girls. As they travel, the driving rain quickly becomes a flash flood. A boulder falls near Dot and her horse, causing the animal to rear up and knock her off and into the waters below. For this intense scene, trainers substituted a horse that rears up on command and a stunt rider doubled as the actress. Tanker trucks pumped the water in order to control flow, and the water levels never went above the horses' knees. The production used a faux rock made of Styrofoam and the horse and actress were inserted into the scene in post production.

In one difficult scene, an Indian shoots his rifle over his horse's saddle at Sam. Sam mounts his horse along with the young women and they begin to ride amid plentiful gunfire. During this tense rescue, a man gets trampled by a horse. To create this bit of movie magic, the production used stunt riders doubling as actors as well as trained stunt horses. All of the horses wore cotton in their ears, and to further reduce the noise, the guns contained only ¼ loads of gun powder. A stuntman then stood in a field while eight other stuntman on trained horses rode towards him at a fast pace, attempting to strike out at the man. To achieve the desired trampling effect, the prop department placed a dummy on the ground and the eight riders trampled the dummy. Actors and stuntmen rehearsed this scene many times to make sure the horses felt comfortable with the action and that the dummy would not fall apart or get kicked up by the running horses, causing a possible hazard.

An intense fall occurs when an Indian shoots one of the young women off her horse. Both the girl and the horse go down and the horse flips over. This horse received extensive training and learned to fall down on command. It took several different shots to film this scene; the cameraman first filmed the actress riding on the horse. The second shot showed the stuntman riding the horse and having it fall down on command. In the third shot, the trainer had the horse lay down on the ground and then positioned the actress next to the horse. Editors inserted these three shots into the film during post production and the end result appears on the screen as an extremely perilous fall.

After Sam and Maggie rescue the young women, they set up camp for the night. The Indians attack the camp with flaming arrows and one arrow strikes the saddle of a horse that turns to see what happened. To create this scene, the prop master on set attached a cable to the arrow to completely control its arc of motion when it appeared to fly through the air and strike the saddle. A trainer stood off camera supervising the scene, and the horse reacted by turning and looking at the saddle when the arrow hit it. The arrow had no flame, however; digital experts added a computer generated flame onto the arrow in post production.

Several rattlesnakes hang from tree branches in leather cinches. A pair of hands holds one of the snakes and extracts venom from it. In a later scene, we again see the snakes hanging from their cinches when Dot (Jenna Boyd), the younger of Maggie's two daughters, falls down near them. Sam cuts one of the leather holders and the snakes fall to the ground. To achieve these scenes, several wranglers placed the snakes in the cinches in such a way that all of the snakes could move about comfortably without falling out. Two different cameras filmed the scenes of the hanging snakes; one camera placed at an angle made it appear as though the snakes dangled higher up on the branches than they actually were. To make it look like Sam cuts the cinches and snakes begin to drop to the ground, another camera was placed on a low angle and two wranglers stood just off camera dropping snakes onto the ground from a safe height. The snakes then began to slither on the ground and four wranglers stood off camera to retrieve them. When unidentified hands pick up a snake to extract its venom, we're actually seeing the hands of a professional snake handler. The actress was filmed in front of a green screen and clever editing inserted the snakes around her during post production.

A coyote perches on top of the kitchen table inside Maggie's cabin. As Maggie approaches, the animal jumps off the table and runs out of the house. A trainer held the coyote, named Wylee, on a rope before filming began. Another trainer stood near the table and coaxed the animal to jump on top of it, while a third trainer stood just outside the door of the cabin and verbally cued the coyote to run out past him. He retrieved the animal after it exited. This entire scene, added to the film in post production, was filmed without dialogue or noises of any kind so that the coyote would not get spooked and remain focused on its trainers.

Dot milks a cow in the barn and milk squirts her shoe as she pulls on the udder . A wrangler placed the cow in a stall and the actress knelt beside it as if to milk it, though no real milking occurred. The audience actually sees the trainer's hands on the udders, but the young actress' shoe as milk squirts on the ground.

A young man feeds chickens in a corral, while other animals stand in their pens as the girls begin to feed them and do daily chores. Trainers checked out the fencing and ground inside the corrals, then herded the animals into the fenced-in pens and scattered food around for them to munch on as the cameras rolled.

In one short scene, a turtle crawls on the ground; Dot picks up the turtle and then sets it back down. A trainer worked with the young actress before filming began and taught her how to handle the turtle. During filming, the trainer set the large tortoise on the ground and it began to crawl naturally. The trainer stood just off camera throughout the scene and retrieved the turtle afterwards.

We briefly see an owl sitting on a branch and later a hawk taking flight. Another scene shows a vulture landing near a bruised and bleeding Sam as he lies on the ground after a fight with the Indians. Bird and man exchange a penetrating stare as they size each other up. The filmmakers shot each of these bird scenes separately and inserted them into the film during post production. Trainers attached a lightweight monofilament line to the birds' legs to control the direction of the animal if needed, then placed the birds on their marks and stood just off camera during filming.

As a gunshot cracks in the crisp morning air, we see a dead cow lying in the snow. Later, Maggie searches frantically for her family and comes across a skinned cow lying next to a corpse. Maggie makes a gruesome discovery when she finds her murdered lover Brake hanging inside animal skins over a fire.

The production unit purchased the dead cow from a slaughter house to use in both of these scenes and kept it on ice to preserve it during the shoot. The production and prop department also created the realistic-looking skins.

In another scene, Lily skins a deer on the porch of the house. Later in the film, one of her abductors asks Lily to gut and skin a dead deer. The audience sees the deer's bloody entrails spill out onto the ground, but again, the props department did an excellent job of reproducing both the dead deer and its innards.