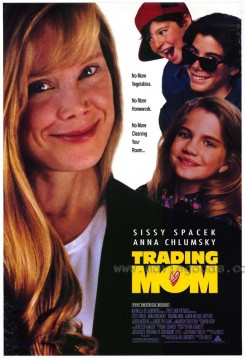 Trading Mom is a comedy-fantasy about three children who erase the memory of their mother through a magic spell and go to The Mommy Market to select a new mother. A hard-working single mom has her hands full with three energetic young children, so she is sometimes short-tempered. The kids are unhappy with mom and discuss their situation with an elderly friend, Mrs. Cavour. Young Harry believes Mrs. Cavour possesses magical powers and, although the older Elizabeth doubts this, there is something wise and mystical about the woman. The children wish they could get a new mother who would be perfect, so Mrs. Cavour tells them the magic words to say that would erase the memory of their mother. If it works she'll be gone and they can go to The Mommy Market to pick out a new mother. That evening Mom is especially out of sorts when she learns that they've gotten into mischief at school and that the school principal wants to pay her a visit. She disciplines them by taking away their privileges for the summer just as vacation is about to begin. Feeling miserable and unhappy, the children try repeating Mrs. Cavour's magic words. When they awaken in the morning, Mom's room is empty and they have difficulty remembering what she looked like. The spell has worked, so they find their way to The Mommy Market where they're told they will be permitted three choices. They pass through the turnstile into the market where they find a dazzling selection of mommies to fulfill any child's dreams of an ideal mom.

The children have a pet iguana named Michael. Michael is seen at various times, sometimes in his aquarium or being held by Harry. When the children try to get rid of Mom #1, they place Michael next to her in bed. The woman awakens and screams as she jumps out of bed. Michael has no reaction to her. Three iguanas portrayed the one. For his various scenes, Michael's handler would merely place him in the proper position. The young actor was instructed on how to hold the lizard properly. Tadpoles are seen in a fish bowl. Later Mom #1 takes the bowl and flushes it down the toilet. Rubber tadpoles were used for this scene. In a scene with Mom #2, the outdoor mom, a raccoon crosses from point A to point B and then scampers up a tree. This scene was filmed in cuts. The raccoon responded to verbal cues from his trainer with food as a reward. Mom #3 is a circus mom who brings the troupe home, along with some animals. A snake is curled around the shoulders of a woman. A monkey is also present. Their handlers were with the animals at all times and the monkey was kept in a secluded yard when not filming. A variety of other animals are seen briefly, primarily as atmosphere or background. They are chickens, a goat, a cat, horses, a seagull and insects. The butterflies in Mrs. Cavour's garden were natural to the location where the scene was filmed. For the cooked baby octopus present in some scenes, both a purchased dead octopus and one made from a gelatin substance were used. Mom #2 is a taxidermist. All her props were rented from a taxidermist. In a closing scene, Harry has a fish on his fishing line which he releases back into the water. A purchased dead fish was used for this scene. The Richmond, Virginia S.P.C.A. represented American Humane on some scenes with animal action. The remaining scenes were discussed with the production company. It is our belief that all animal action was done within AHA guidelines.