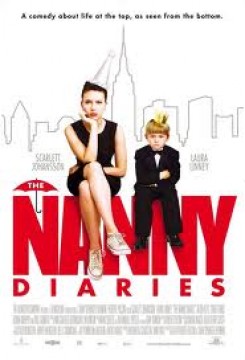 After graduating from college, Annie Braddock (Scarlett Johansson), a young woman from a working-class area of New Jersey, decides to take some time to "find herself," so she accepts a job as a nanny, figuring it would be easier than tackling the business world and would give her a chance to conduct an anthropological field study of upper-class lifestyles. But when she tries to meet the demands of her controlling, tyrannous socialite boss (Laura Linney), she realizes that extreme wealth is not all it is cracked up to be and that nannying can be thankless and exhausting.

An elderly woman sits on a park bench feeding some pigeons. For this scene, two "sitter" pigeons (specially trained to stay in one area) and several other blue barb pigeons were used. The "sitters" were fitted with a thin monofilament line loosely tied to their ankle, which was held by the off-screen trainers as a safety precaution. Their wings were also lightly taped so that they could still fly, but not very far. Trainers placed the birds on their marks and placed bird seed at their feet to keep them in position. Trainers then stood just out of frame during filming. All birds were easily returned to their crates. As a man on a Segway approaches, the pigeons appear to be frightened away. For this action, trainers gently tossed two birds across the camera frame to other trainers who were waiting with crates and seed. The other blue barbs were removed in a separate shot, which was edited together in post-production. A fence was put up around the filming area, a fine-gauge net was on hand and all dogs in the park were kept away from the filming area. Later, a pigeon perched on Annie's windowsill flies away. This scene was filmed in front of a green screen. The trainer placed the bird on a perch and put bird seed down to keep the bird positioned. The trainer then stood on a ladder just off-screen, holding a net for safety, and the bird was cued to fly toward the trainer, who retrieved the bird. Safety nets were placed around the window perch as backup.

A dog walker briskly walks several dogs down the street on leashes. For this scene, the dogs and the actress were familiarized with each other and comfortable with the action. The trainer handed the leashed dogs to the actress right before filming began and retrieved them immediately afterward.

The little boy's parents give him a puppy. For the puppy scenes, several puppies were alternated in the role and were well-rested between takes. The cast and crew members were introduced to the puppies and instructed on proper handling before filming began. All action involving the puppies was mild; most of it was natural puppy play. In all puppy scenes, the trainer stood nearby to cue the puppy and retrieve it immediately after filming. For the scenes in which the boy walks the puppy onto a driveway and when the puppy is on the beach, the grounds were inspected for safety before filming and the areas were secured. For the scene in which the boy's father puts the puppy in the taxi, the actor gently placed the animal in the car. When the car slowly drove off, a trainer hid in the backseat for safety, and the area was blocked off to traffic. The dog whining was a sound effect. When the puppy was on the ferry with the nanny, the trainer put the dog on its mark, secured its leash to a bench and cued it to "sit" and "stay." The puppy was well- rehearsed and closely monitored. When the puppy appeared to urinate on the carpet, the trainer placed the dog on its mark over a pre-made wet spot. The puppy then was verbally cued to "squat" and was given food rewards.