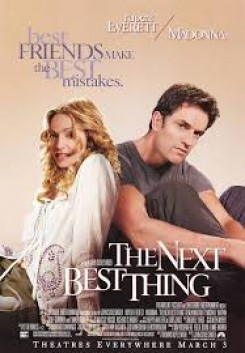 Next Best Thing, The

The Next Best Thing is a drama about best friends. One is a straight woman and the other a gay man. One extraordinary evening results in the child they have together. They happily share the child's upbringing until he is five years old and she falls in love with a straight man who wants her to move away and bring the boy with her. A nasty custody battle ensues that threatens all they have come to trust and love.

The animal action in the film consists of a parrot in a cage as background atmosphere at the home of wealthy friends. Also in the film is a dog who appears as the leading man's best friend. The actor and the dog play well together and well they should. As it turns out, the dog, a 10+ year old Black Labrador, is Rupert Everett's personal canine companion, Moise.

In the film Moise makes his film debut. As he ran and swam in unscripted scenes, he generally stole the hearts of the cast and crew. Although we understand from his human that he has no future aspirations as an actor, we are sure that "Mo" found the next best thing - as a star in his human's life story.