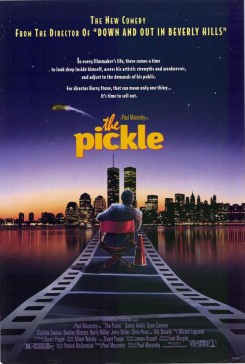 The Pickle is a comedy about a famous film director and producer, Harry Stone, who is going through a somewhat belated mid-life crisis just as his most recent film titled "The Pickle" is about to premiere. Harry's in severe artistic and financial trouble and he's hoping that the film, which is about a cucumber that grows so big, it grows into a space ship, will be a big hit. However, he has serious doubts. Harry's present love is a beautiful French woman, young enough to be his daughter. She adores Harry, but Harry treats her badly, venting a mean streak in himself. Harry's back in his home town, New York City, for the premiere the following day. During the next 24 hours much of Harry's life will pass before him as he rekindles romance with two former wives and visits his mother in Brooklyn.

The Pickle is a film within a film as there are lengthy excerpts from Harry's film, which is a musical fantasy. Cows are present in many of theses excerpts. The cows have no action and are just there. At the end of Harry's film, a cow cries as a tear rolls down her cheek. This was accomplished with the application of harmless glycerin. Other animals seen in the excerpts are horses pulling a wagon, bunnies, chickens in a barn, a dog held in arms, and two Great Danes standing in front of the Plaza Hotel. In the main story, carriage horses are seen in front of the Plaza Hotel and several dogs on leashes are seen being walked by extras. A pigeon shares a scene with Harry on a window ledge.