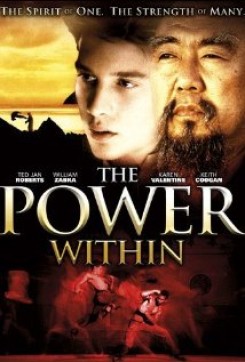 The Power Within is a film about two ancient Chinese rings and how they change Stan Dryer, a high school student's, life forever. Stan is an ordinary teenager. He goes to school, hangs out at the local burger place with his friends and checks out the babes. But all that changes when he meets Yung, a Chinese man with special powers. Stan was always a wimp before meeting Yung, but now he has guts and is great at martial arts. Stan helps Yung escape from Vonn, a thief, after he stabs Yung during a fight between the two. However, Yung's wounds are fatal. Before dying he explains to Stan why Vonn is after him. There are two ancient rings that give the wearer enormous power. Yung has one and the other is in a museum. Vonn stole the one from the museum and he wants the ring that Yung has because the one who wears both rings will be all powerful. Yung tells Stan that the ring in his possession has chosen Stan to be the next wearer. When Stan asks why the ring picked him, Yung tells him that it baffles him also. Yung puts the ring on Stan's finger. Once there, it will not come off until he can believe in himself and his true abilities. He warns him that the power is not in the ring but inside himself.

Vonn begins following Stan when he realizes that he is in possession of the other ring. After a brawl with Vonn and his thugs, Stan is picked up by Yung's granddaughter, In-See. She takes him back to their home where he meets Chin Do, a chimp. At first Stan thinks that the chimp is actually Yung. However, he realizes he is wrong when Yung appears to him. Stan started having strange dreams after meeting Yung. When Yung reveals himself, he explains what is happening and why Stan is having these dreams.

The next day Stan has to leave to pick up his date for the prom. While at the dance Vonn, along with his thugs, show up and start a fight. During their fight Vonn takes the ring from Stan. However, Stan remembered what Yung had said to him, that when he truly believed in himself and his abilities he would no longer need the ring. Therefore, Stan defeats Vonn without the powers of the ring. The police take Vonn away, explaining that he is wanted in three countries for robbery. Stan becomes a normal high school student again, except now he believes in himself and knows he has the power within to do whatever he wants.

When Stan goes to Yung's granddaughter's house, he meets Chin Do, a chimp. Chin Do plays up to Stan and then later sits next to him at the table. The chimp was merely following his trainers voice and hand commands to do trained behaviors.

When Stan wakes up from one of his dreams, he finds the chimp sitting in a chair patting his head. The chimp had been placed in the chair by his trainer and told, to "touch." In yet another scene the chimp follows Stan as he runs down to the lake in search of Yung. For this the trainer placed the chimp on his mark at point A and then went to point B and called the chimp to "come".