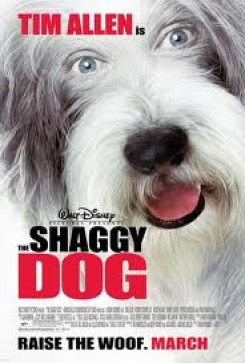 In this remake of the 1959 Disney classic, Deputy District Attorney Dave Douglas (Tim Allen) is a career-driven father in the midst of a case that pits animal rights activists against a pharmaceutical giant that claims it does not test on animals. When a mystical Tibetan terrier shares his high-octane DNA with Dave, the workaholic dad starts turning into a shaggy dog himself at the most inopportune times. This new perspective offers Dave serious insight into the hopes and dreams of his family, as well as into the corporate clients he has been defending.

Viewers will be interested to know that seven bearded collies were on call for the role of the Shaggy Dog, though one dog—"Coal"—performed most of the action.

At the Grant & Strickland laboratory, the "Dog of Ageless Wonder" lies on an examining table hooked up to monitors. Other animal inhabitants of the lab include a bulldog-frog hybrid, a furry-tailed cobra, mice, rabbits, a chimpanzee, and a capuchin monkey. Computer-generated imagery (CGI) was used to create the mutant frog as well as the cobra's fluffy tail.

Trainers standing off-screen cued the caged animals to bounce, and sound effects of loud barking were added later. Only key crew members were on set when the cobra was used, and opaque glass between the snake's cage and the other animals prevented them from seeing each other. The tubes hooked up to Coal were props.

When Dave tries to drag the Tibetan terrier out of the house in one scene, the dog bites his hand and transfers his special DNA. Coal was prepped for the tugging action, and a trainer in wardrobe doubled for Allen in the close-up shot of the bite by putting his hand in Coal's mouth and moving it around like the dog was biting.

After turning into the title character at the pound, "Shaggy Dave" runs all over town and stops short when he sees his image on the many TV screens of an electronics store. In disbelief, Shaggy tries to wake himself up by ramming straight into the store window. But it doesn't work; he slides down the glass pane and collapses on the sidewalk.

The streets were closed to all traffic for the dog's long run. Production created an animatronic puppet head to film Shaggy's collision with the window. This footage was mixed with that of the real dog's face sliding down glass, which was filmed against a green screen. The trainer placed Coal in a sit-stay position and gently leaned the dog's head against a large pane of glass. Two off-camera crew members then moved the glass up, which created the illusion of the dog sliding down.

In one scene, Dave sees a cat on a tree branch, morphs into canine mode, and decides to chase the frightened feline. The pursuit starts on the street. Cars brake to avoid the cat, which jumps onto the hood of an animal control van. Dave chases the cat through a neighborhood, on top of a table at a sidewalk café, and into traffic again.

The cat's trainer remained just out of frame on a ladder during the tree shot. She held a treat on a bait stick to get the cat to look toward the window and used a buzzer and food reward to cue the jump from the tree. The jump was actually from a height of less than three feet to a platform below frame.

The running sequence was filmed in short bursts, with trainers at the start and end marks. Each had a carrier, and the end mark trainer waited with a buzzer and food reward. Some parts of the sequence were achieved with a CGI cat, such as when the cat runs on the table top. The dog and cat were filmed separately.

Though the scene appears chaotic, the street was closed to all traffic and the animal control truck was actually at a standstill the entire time. Two crew members merely pushed the back bumper up and down to give the effect of a sudden stop. The truck had a platform set up on each side of the front tires, and one trainer released the cat at the first platform while a second handler on the other side called to the animal.

During the mayhem, a garbage truck rear ends the car of Dave's neighbor and his French bulldog, "Attila," who goes flying against the windshield. A trainer hid in the back seat for the first shots with the real dog, but the filmmakers used a stuffed dog and a compression rig that shoved the stuffy forward for the "smashing" sight gag.

Back at the Grant & Strickland lab, the animals band together to help free Dave by pushing over all the cages. Off-screen trainers cued the chimpanzee to shake his cage, and the rabbit and snake enclosures were actually empty and pulled over by the special effects (SFX) team. A fake snake was pulled across the floor, and a CGI version gives the keys to the actor. A stuntman replaced Allen in the cage when the animals knock it to the floor.

After a brief tussle with the evil scientists—ended by the chimp zapping them with the same prop cattle prod they had previously used on Shaggy—the animals make their escape through an air-conditioning duct. On action, the trainer released the chimp, which climbed up Allen and into the opening of the ceiling vent. Then the capuchin monkey was released to enter the same way, and the rabbits were lifted up. An unseen trainer waited on the other side to receive the animals, all of which were well-prepped for the action. The vent was actually a large prop with multiple openings built on a sturdy wood structure and low to the ground. Trainers rewarded the animals with treats at the end mark and released them one at a time.

Dave drives all the animals to the courthouse, but traffic is so thick that Dave decides to leave the car and proceed on foot. After transforming into Shaggy, he leaps off a bridge and onto the top of a bus. Most of the driving sequence was simulated against a green screen. For the short segment filmed on a real road, the car was towed by a trailer and the group had a police escort.

Trainers positioned the chimp in the passenger seat, the monkey on Allen's shoulder, the rats on the dashboard, and the rabbit on the center console. For safety, the monkey wore a leash held by a trainer hidden in the back seat. An off-screen handler cued the chimp to smile and go through the various items in the glove compartment. The frog and snake were CGI.

Shaggy's jump off the highway overpass was actually filmed indoors against a green screen, with the dog in a secured harness. Coal was extensively trained and prepped for this stunt, and trainers gently manipulated the dog's paws with erasable green sticks while the SFX team worked the harness rig. Both green screen and motion control techniques were in play when Shaggy rode on the roof of the bus. Coal stood on a rotating table that moved slowly while fans provided the dog with wind-tousled hair.

Dave's animal companions hang out on the car in front of the courthouse in one of the film's final scenes. A rubberized neoprene material was applied to the roof of the car for traction, and trainers drew a line with yogurt to keep the rats occupied. Multiple trainers were in the shot as part of the crowd of extras to step in as needed.