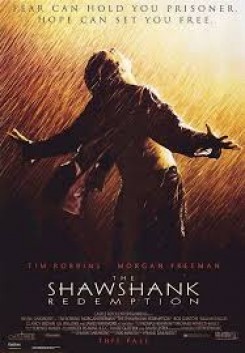 This story, based on the novel by Steven King, Rita Hayworth and the Shawshank Redemption, begins in 1947 when Andy DeFrain is arrested for the vicious murder of his wife and her lover. Mr. DeFrain, a high powered banker for many years, is convicted for the brutal murders of which he has been accused and is sentenced to serve two consecutive life sentences with no parole. The unfair part about all of this is that DeFrain is innocent! He is transported by bus to the Shawshank Prison to begin his dismal new life. He is a very quiet man and makes no friends for several months. When he does finally open up, he speaks to Red, another prison lifer. Red is the man everyone goes to for the little things in life that they aren't allowed; cigarettes, whisky, candy etc.. It seems that Red can get just about anything. Andy and Red develope a deep friendship over the next nineteen years. One morning at cell check it is discovered that DeFrain is not in his cell. It seems that he has spent these nineteen years digging a tunnel in his cell wall behind his Rita Hayworth poster. He has finally escaped, and he has done it successfully, taking with him 1/2 million in unmarked dirty money from the crooked warden. One year later Red is finally granted his parole. He tries to adjust to the outside world, but finds it very difficult. After all, he has spent 40 years of his life institutionalized. One day when he is just about to end it all, he remembers a promise that he made to his dear friend. Andy had asked Red to go to a certain field and dig up something under a lava rock that he wished Red to have. When Red complies, he unearths a letter and some cash. The letter gives him directions to Andy in Mexico. Red follows Andy's instructions and the two close friends are reunnited and live out the remainder of their lives wealthy, content and free.

Animal action is minimal. Brooks, one of the prisoners, has a pet crow, Jake, which is seen in four separate scenes. The first is a scene where Brooks opens his jacket to reveal the baby bird in his pocket. He takes a maggot from Andy, which he has found in his food, and feeds it to the bird. The maggot was made of baby food. The baby bird was placed in the actor's ample sized pocket by it's handler just prior to the scene being shot and removed as soon as the scene was completed. The remaining three scenes show the crow as an adult bird in atmosphere scenes. Other animal action shows a mouse scurrying down a prison hall. A man is also seen feeding pigeons in a park.