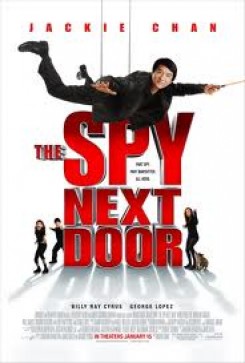 Spy Next Door, The

To impress his girlfriend, Bob Ho (Jackie Chan) offers to babysit her three mischievous kids in hopes of winning them over. But when Russian mobsters pursue them, protecting the kids becomes almost as difficult as his life as a CIA spy.

Gillian's (Amber Valletta) kids have a pet pig, cat and turtle, which are seen throughout the film performing such mild action as sitting, standing, lying down, being held, being petted and walking from one point to another. For all of these scenes, trainers used hand signals and verbal commands to cue the mild action, which the trained animals were accustomed to performing. All grounds were inspected for hazards and sets were closed off and secured. Cast and crew members were introduced to the animals and instructed on their proper handling before filming began.

All food that the animals ate was deemed safe for consumption, and takes were limited to prevent overeating. The bacon the boy fed to the pig was "Beggin Strips" treats, and the child actor was instructed on how to give it to the pig. The scene of the cat on the roof was filmed in separate shots, using a combination of a stuffed prop cat and a real cat. For shots with the real cat, the trainer placed the cat on its mark and cued it to stay. The trainer sat right next to the cat (just out of camera frame) and used a bait stick to get the cat to stay and look in certain directions.

Due to late notification or limited resources, American Humane did not monitor some of the turtle action.