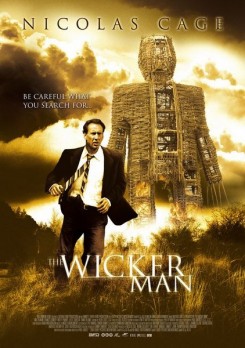 In this remake of the 1973 British horror thriller, Nicholas Cage plays Edward Maulis, a Los Angeles sheriff who receives a letter from a former girlfriend (Kate Beahan) asking for help in finding her missing child. When Maulis travels to the private island where she resides, he meets some very strange residents with an unusual pagan lifestyle. Although Maulis knows something bizarre is going on, he can't quite put his finger on what it is.

As Edward runs into a barn to look for the missing child Rowan (Erika-Shaye Gair), some birds perch at various spots around the barn. These pigeons had their wings secured briefly with medical tape to prevent them from flying away. Trainers positioned the birds on various marks with food to keep them occupied, and closed the barn doors during filming as a precaution. Three trainers stood off to the side as the cameras rolled and retrieved the birds after the take.

When Edward visits the local schoolhouse, he opens a wooden hinge-top desk and a large black bird flies out and onto a ceiling rafter. A raven named Chili was used for this scene. The trainer gradually prepared the bird for being in a confined space by first putting Chili in a large, open cardboard box and calling the bird to come to his outstretched arm. As Chili showed confidence in this behavior, the trainer began to close the lid for short periods of time and eventually graduated to smaller boxes and finally to the desk that appears in the scene. For the shot of Chili flying up to the rafter, the bird was filmed from a starting point on the trainer's arm. Post production editors sped up the film a little to make it appear as if the bird were flying faster.

In one scene, Edward takes a spill on his bicycle and accidentally hits a bee hive. Computer-generated images (CGI) of bees chased Edward as he ran across a field. Later, a man dressed as a beekeeper takes a honeycomb from a hive while some bees buzz around nearby. This man was a real beekeeper, and he provided the bees, hive and honeycomb for the shot.

When Edward searches Sister Summersisle's (Ellen Burstyn) house, he opens a hallway door and discovers a woman with bees crawling on her face. The beekeeper's assistant doubled as the actress in this scene. Some real bees were placed on her face by the beekeeper, and production added in some CGI bees as well. A minimal number of crew worked this scene, and the air-conditioned set was secured with a double door system to contain the insects.

In one scene, a man holds a lead rope of a horse which is attached to a wagon loaded with some logs. As other men add more logs onto the wagon, some of the wood falls to the ground. Because the wagon never moved, the horse was not affected by the weight of the logs or of the wagon at any time. A trainer doubled as the actor holding the horse so the animal wouldn't wander off or become frightened when the logs fell.

As an unseen force pulls Edward up the "Wicker Man" structure, he passes some cages in the front of the Wicker Man which contain various small animals. The Wicker Man structure was made of steel and wood scaffolding surrounded by wicker, and the animal cages within the structure were made with steel bars and had solid bases. Each cage contained food and a stainless steel water bucket designed to look like wicker. Two trainers and their animals were loaded into the cages via a lift. Before the Wicker Man was set on fire, all real animals were removed and replaced with stuffed props.

In one scene, Edward places his coffee mug on top of a fly crawling on the counter. This action was filmed in separate shots. An insect wrangler placed the fly on the counter and the actor set down a mug with no bottom and a secure top. Although it appeared as if he had smashed the fly, the insect was safely removed from the mug afterwards.

The horseback riders appearing on a television during one scene came from stock footage from an old Western film purchased by the production.