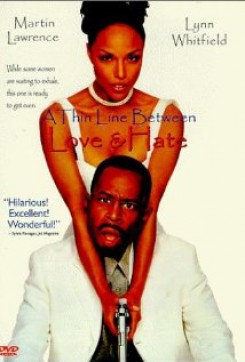 Thin Line Between Love And Hate, A

A Thin Line Between Love and Hate is reminiscent of a black version of the film Fatal Attraction with dark comedy overtones.

Darnell and T are best friends and both very chauvinistic womanizers. They continuously compete to see who can get the most women. They have loads of opportunities, as they both manage a nightclub called Chocolate City. One evening while at the club, Darnell spots the most beautiful woman he has ever seen, Brandi Webb. Unfortunately, she will not give him the time of day. He is relentless and pursues her until he finally gets her to agree to a date. Darnell makes a bet with T that he will be able to get Brandi into bed, and if he does, T will have to concede that Darnell is the best of the best pick-up artists.

Darnell romances Brandi, but is not able to convince her to sleep with him. Out of desperation, he breaks the cardinal rule of playboys. He tells Brandi that he loves her. This ploy works on Brandi, and Darnell has won his bet,...but at what price? Brandi quickly becomes very demanding of Darnell and obsessed with him.

In the meantime, Mia is Darnell's one true love. He has loved her since they were teens growing up together, but Mia left to join the armed forces and to find herself. She has now returned to town on leave to decide whether or not she is going to re-enlist. Darnell is obviously still in love with Mia, but has trouble changing his doggish ways. Mia makes it quite clear she will stay for Darnell if he will be with only her, and no other women. Darnell agrees, admitting his love for Mia. What Darnell doesn't realize is Brandi is not going to be so easily dissuaded. She has no intentions of allowing anyone to interfere with her plans of making Darnell her man, and she his only woman.

Animal action is limited to one scene in which we see Darnell and Brandi riding horses. While they are galloping down the trail, Brandi realizes that Darnell doesn't know how to ride. We see Darnell hit the ground, as if thrown off the horse. This scene was shot in cuts. Two of the horse trainers, doubling for the actors, rode the horses. It was the actor filmed hitting the ground, but he was never actually on the horse.