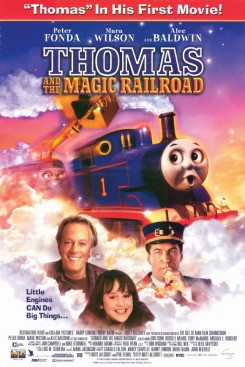 Thomas and the Magic Railroad

In this family adventure film we meet Thomas, who is a talking train engine. When Thomas hears the story of a lost engine somewhere in the mountains, he wants to help rescue his fellow locomotive. Diesel, a bad engine wants to find the poor lost engine and destroy it. Thomas wants to help the engine. Mr. Conductor, along with Billy, Mutt, and Grandpa try to help Thomas save the lost engine before Diesel finds it.

Mutt The Dog's Actions Mutt was played by a 6 year old, male, Terrier mix named Bentley. A second dog was present on set as a double but Bentley performed solo in this film. He was accompanied by two trainers and a veterinarian at all times. In several scenes throughout the film, Mutt is shown standing or sitting on the train platform. Sometimes he is shown looking at Mr. Conductor. The trainers stood off camera and used verbal cues to get the dog to sit, lay down, stand and stay. Mr. Conductor was added into the scene later, during editing. When Mutt is shown running through the crowded train station, one trainer doubled as an actor while the other stood off camera and held up a treat that Mutt ran towards. The trainers put Mutt into the train and he sat and rode with the actors as the trainers stood off camera. In several scenes we see close up shots of Mutt's face reacting to something. These were all taken in one day with a trainer standing off camera, holding up Bentley's favorite toy. Later, in post production, these scenes were edited into the film in the appropriate spots. Birds, Sheep and Antelope were filmed in their natural habitats and provided a beautiful background for a few scenes.