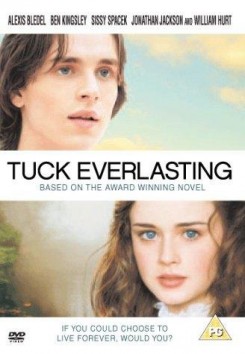 In this magical story set in the early 1900s, 15 year-old Winnie Foster (Alexis Bledel) discovers that her next-door neighbors, the Tucks, have a water-well spring that that prevents people from growing older. Enchanted by the family, Winnie soon falls in love with one of the sons, Jesse (Jonathan Jackson), who offers her a drink from the spring. A broad range of animals such as horses, a fawn, and even a toad, appear in the film, adding to the story’s mystical qualities.

Horses are featured throughout the film, attached to and pulling wagons, tied to posts or grazing in the background of scenes. All of the cart-pulling horses were attached with breakaways, which protected the animals by ensuring that the cart could safely detach from the horse in an  instant. Whenever possible, stunt riders were used, as well as experienced stunt and jumping horses.

In one scene, a horse grazes in the field as three men stand up and shoot guns. The horse remains standing, unharmed. The trainer placed the horse on its mark while the men were filmed at another time. Both scenes were edited together along with the sound of the gunshots in post production. The rattle snake that is coiled up and strikes at the end of this scene was also filmed separately under the watchful eye of its trainer.

Later, several men on horseback ride carrying torches. They ride up to a house and torch it. For this intense scene, all of the horses and riders in this scene were experienced. In addition, the specially-made torches ensured that the flames were controlled and never would touch the animals or human actors. The house fire was contained and never close enough to harm the animals. Creative camera angles were also employed to enhance the severity of the blaze and make the horses and riders appear closer to the flames than they actually were.

Men with dogs on leashes search the woods as riders on horseback ride beside them. The search party crosses a shallow stream at one point. Trainers stood off-camera and supervised the action. The stream and horses’ paths were cleared of debris and checked for all-around safety. Trainers handed the dogs’ leashes to the actors and cued the animals from off-camera to look in various directions.

Winnie and Jesse meet a fawn in a meadow. The fawn approaches the couple and Jesse bends down and pets it. In return, the fawn licks his face. Two trainers accompanied the tamed fawn to the set and cued its actions from off-camera. A bit of food was placed on the actor’s face to prompt the animal to lick it.

In several scenes, duck swim in a nearby lake. The ducks were filmed swimming in their natural habitat.

Geese and a goat are fed in one scene. Trainers placed the geese in the fenced-off yard and scattered feed on the ground for the animals to eat. The goat was placed in the housing pen by a trainer, who also gave the animal some munchies during filming.

Winnie lies on the grass and sees a toad staring at her, croaking. A trainer placed the toad on its mark and scattered treats on the ground to ensure that the toad was content to stay and nibble for the scene.

Winnie tries to catch some fireflies in one scene and a man catches one in his hand then lets it go. The fireflies were computer-generated.