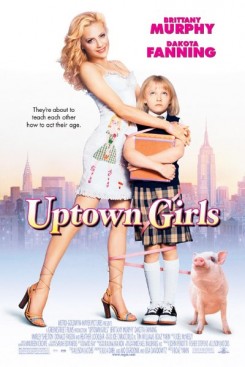 Molly Gunn (Brittany Murphy) is forced to get a job when her manager steals all of her money. She becomes a nanny for Ray (Dakota Fanning) the daughter of a very busy music executive (Heather Locklear). Ray is neglected by her busy mom and Molly is just what she needs to help her grow up. What Molly doesn’t realize is that Ray will also help her grow.

The part of Molly’s pet pig, Mu, was played by a Vietnamese Pot Bellied pig named Springer. The actress, Brittany Murphy, was introduced to the pig before filming began so they would both be comfortable with each other. Springer was trained to walk with a harness and leash and was very comfortable on set wearing them. When it was time for the pig to go before the cameras, the trainer would walk the pig on the leash to its mark and then take off the harness and wait off camera.

Molly is asleep in her bed and Mu enters the room, climbs into bed with her, and nuzzles her until she awakes. Four stairs were specially made, secured and padded by a crew member to help the pig climb up and down from the bed. A trainer released the pig that very confidently walked up the steps and climbed onto the bed. The trainer hid some treats under the pillow to encourage the pig  to nuzzle near the actress. Molly bathes Mu in one scene in a tub of water. A special platform was built inside the tub as well as around the back of the tub. The platform was covered with foam to secure footing. The trainer worked with the actress before hand to show her how to pick the pig up out of the tub and set it down on the platform, where the trainer waited to retrieve it and dry it off.

As Ray and Molly have tea in Ray’s room we see Mu wander under the table. The pig walks up to Molly, puts its front paws on her lap And Molly feeds it something off her plate. Later the pig pushes the door open and exits the room as Molly turns up a song on the radio. A trainer released the pig and used a combination of hand signals and verbal cues to get the pig to achieve the action. When Springer saw the actress with food at the table, it naturally placed its front paws on her lap to beg. A trainer stood behind the door of the room and helped Spencer open it up to make his exit.

In one scene as Ray lies in her bed, Molly enters and Mu runs across the bedroom floor. A trainer released the pig and it ran to another trainer across the room that was waiting with a treat.

As Molly sleeps in bed, her arm hangs over the side. Mu walks up to her arm and begins to sniff it, waking Molly up then moves to lie on some pillows on the floor next to the bed. A trainer had spread some baby food on the arm of the actress so the pig was more than happy to lick the actress. Once a trainer put Spencer on the pillows, the pig did not want the scene to end!

In another scene, Mu is tied to a chair at Huey’s house and later tied to a door knob in the hallway of Ray’s apartment. A trainer tied the leash to the chair and the door and stood just off camera holding up toys to get the pig to look in various directions. The pig is so used to wearing the leash and harness that it wasn’t bothered by it on screen.

Molly joins Ray back stage at a recital where she is singing. Mu is there as well, standing by Molly. A trainer put the pig on its mark, stood just off camera during filming, and rewarded Mu with a treat afterwards.

Molly feeds Mu some leftover food on the floor of the kitchen. Later, Molly and Neil make love on the kitchen table. As the couple begins to move around on the table, things begin to drop onto the floor. A plate of strawberries falls to the ground and Mu runs over and begins to eat. A trainer held the pig on its leash off camera while a crew member dropped the plate of strawberries onto the floor, they didn’t just fall off. The trainer released Mu who ran to the berries and began to eat them.

Mu is under the coffee table lifting up the lid of a pizza box with its snout and begins to nibble on the leftovers. The pig had rehearsed this so often that it knew a treat was waiting for it inside the box. The lid was loosely placed on the top and the pig had no problem lifting and less problem nibbling.