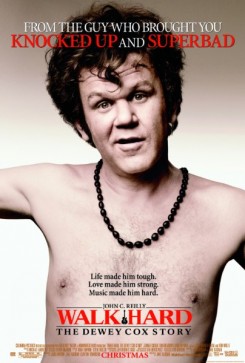 After accidentally sawing his brother in half, young Dewey Cox (John C. Reilly) learns to cope through music, eventually becoming a famous musician. He spends his years trying to overcome his personal struggles, such as drugs, alcohol and the demons of his childhood.

A large bull chases a boy in a field. This scene was filmed in separate shots. The well-trained bull was cued to “toss” his head and “dig” his hoof at the ground to make it appear angry. Later, one trainer released the bull at point A and a second trainer at point B enticed the bull to come by shaking a grain bucket. While the bull ran to point B, a stuntman standing in for the child actor ran in front of it to make it look like the bull was charging the actor. The set perimeter was fenced and the grounds were checked to make sure they were safe.

A rattlesnake is seen in the grass. A boy picks it up and throws it. This was filmed in separate shots. Using a snake hook, trainers removed a diamondback rattlesnake from its container and placed it on the grass with a small box over it. Moments before filming, they removed the box to reveal the snake coiled and rattling. Immediately after this brief take, the box was again placed over the snake and the trainers used the hook to place the snake back in its container. Then a prop rattlesnake was placed on the grass,  and a stand-in for the child actor picked it up and threw it. Production provided documentation that the prop snake was not a real snake.

Dewey and his brother duel with machetes inside a barn. A donkey, cow, horse, chickens and pigs are seen in the barn. Trainers led the animals into their respective pens and stalls and secured the gates. Hay and feed were placed on the ground and trainers stood off-camera shaking grain buckets to get certain animals to look certain ways. The choreographed machete fight involved stunt doubles using fake machetes and took place a safe distance away from the animals.

Dewey walks into the room holding a chimp in his arms. For this shot, trainers instructed the actor on how to hold the chimp. Later, when the chimp is seen comforting Dewey on the floor, the chimp was cued to pat the actor’s back and to hug and kiss him.

A giraffe standing outside stretches his neck through the kitchen window. He uses his tongue to grab a carrot from Dewey, while a chimp sits in a highchair on the other side of the table. Two trainers placed the giraffe, which was wearing a halter, on its mark. Then a trainer hiding in the kitchen shook a food bucket to entice the giraffe to stick its head through the window. The chimp was placed in its chair a safe distance from the giraffe and was given food to eat throughout the scene. A fence was set up around the set perimeter as a precaution.

Dewey and the chimp sit next to each other on a bus. Trainers placed the chimp on a suitcase to raise him higher. One trainer lay on the floor beneath the bus seat and one stood near the back of the bus. When the actor’s dialogue required him to raise his voice to the chimp, not only did the chimp not mind, he also wanted to give the actor a hug!

During Dewey’s final concert, the chimp is sitting in the audience wearing clothes and a wig. The chimp was placed on an apple box on the auditorium chair and held in the chair by a leash attached to a harness around the chimp’s waist. A costumed trainer was in the seat next to the chimp. Off-camera trainers stood at the chimp’s eye level and cued it to look certain ways. The chimp was given praise, water and treats between takes. All clothing and diapers worn by the chimp were comfortable attire that the chimp was accustomed to wearing.

Dewey and Darlene (Jenna Fischer) go horseback riding. Moments later, he helps her dismount her horse inside a barn, with other horses nearby. The riding scene involved stunt riders in place of the actors. The horses cantered from point A to point B on a grass field that was checked for debris and holes. For the dismount, the actor helped the actress -- both of whom were well-rehearsed -- off the horse, with one rein around its neck and another rein loosely wrapped around a hitching post. Hiding wranglers surrounded the horses in their stalls.

A camel stands grazing in Dewey’s front yard. Trainers walked the camel to its mark on the lawn and placed food on the ground to get the camel to stay. Trainers remained nearby during the brief scene and retrieved the camel immediately after filming.

Due to limited resources or late notification, American Humane did not monitor some of the horse, chimp or cow action, or any of the goat or sheep action.