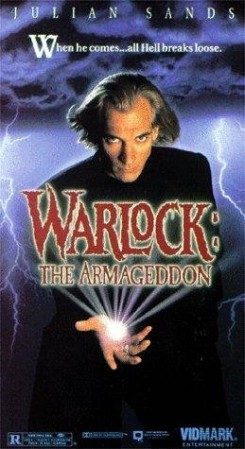 Warlock: The Armageddon is a horror film which pits the forces of good and evil against each other in a duel to avert the end of the world. The story is awash with abstract symbolism amid much violence and gory special effects. The son of Satan is unleashed on the earth through certain rituals in conjunction with a lunar eclipse. His goal is to bring about The Armageddon, or the end of the world. To accomplish this he must possess six magical stones called Runestones and he has six days to find them. He leaves a path of torture, mutilation and murder in his violent quest. The only threat to the Warlock is a group of Druids, who were given certain powerful and magical gifts by God for the sole purpose of stopping The Armageddon. The final responsibility falls upon two of these Druids, a smalltown high school boy and girl who have one last violent show-down with the Warlock.

In an opening scene several riders on horseback attack a group of Druids as they are performing one of their ceremonies. There is a brief skirmish and sword play. This scene was shot in many cuts over a period of two days. The horse action was basically galloping from point A to point B which was filmed from various angles. The ground had been carefully inspected and cleared of any obstacles or hazards and the horses were kept clear of any of the crossbow action and torches which the men carried for this night scene. A dog is present during the bizarre birthing scene in which the son of the Devil is born amid many gory special effects. At first, the dog is seen sitting on a bed, barking. To accomplish this, one trainer placed the dog on the bed and stepped behind the camera and called the dog to look and stay. A second trainer, off to the side, called to the dog to look and speak. After the birth, the dog sniffs at a slimy mass on the floor, then licks it and is devoured by it. This scene was done in cuts. On the trainers verbal command, the dog approached the clump of slime. The camera then cut and the real dog was replaced by a fake dog. This scene is done very quickly and the viewer doesn't actually see the dog being devoured. For a scene in which dead birds litter a street, both real and fake birds were used. The real birds were sparrows that had died of natural causes and were frozen until they were ready to film the scene. Stage make-up was applied to one of the birds to make it appear as if there was blood on it. A rabbit is seen briefly as background and a squirrel in the woods is picked up by an actor, kissed, and gently placed back on the ground. Insects appear in several scenes as atmosphere or crawling over various objects.