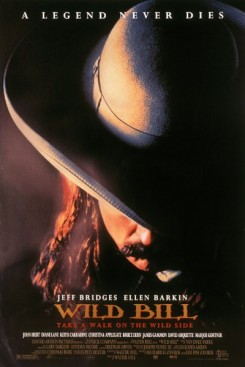 Wild Bill is a film about the dark side of Wild Bill Hickock that no one ever hears about. It is a tale about a ruthless, obnoxious, hard drinking, degenerate of a man. The film's beginning is a series of flash back scenes where his good friend, Charlie, tries to justify the kind of person he became In Wild Bill's last days he lived in saloons and opium dens in the Dakota territory of Deadwood. He played cards and drank with his friends. People came to challenge the great Wild Bill Hickock. There is one person in particular that stalked Bill in his last days and that was Jack McCall, a young man with a personal vendetta towards him. Bill had been romantically involved with McCall's mother before she died. She always believed he would come back, but, he never did. Jack blames Bill for all his mother's unhappiness and is determined to kill him. He goes to the opium den one night to kill Bill but he can't bring himself to do it. Later Jack is approached by Donnie Lonigan and four other gunmen offering their services for money to kill Hickock. At first Jack refuses, but after realizing he can't do it on his own, he takes them up on their offer. They pick a day when the town is deserted, as everyone has left for another gold strike. Everyone is gone but Bill, Calamity Jane, California Joe, and Charlie. Jack enters the saloon along with Donnie Lonigan and his hired gunmen. Jack has Lonigan and his men get everyone's guns. He proceeds to tell Bill that he intends to kill him for ruining his mothers life. Jack keeps everyone waiting as he holds his gun on Bill trying to get up the nerve to shoot. What should have taken a matter of minutes takes hours, because Jack can't bring himself to kill a man in cold blood. Jack along with Lonigan and his men finally leave, going to the stables to get their horses. Bill, however, will not let the incident go. He follows them to the barn and proceeds to gun down Lonigan and his men as they get on their horses. Jack is crouching down behind a stall when the smoke clears from the gunfire. Bill tells the kid to "Let it go" and offers to buy him a drink. Back at the bar, as Bill is playing cards with Joe and Charlie, Jack listens to Joe brag about all the great fights Bill has been in, and how he always wins. It is finally more than Jack can take. He aims the gun at the back of Bill's head and pulls the trigger. Hickock finally played his last hand of cards and lost.

Animal action involves the use of horses, chickens, pigs, mules, a dog and a fox. Most of the animals are used as background, basic riding, or pulling wagons. In one scene Bill has a flashback where California Joe and he are confronted by a war chief. The chief challenges Bill to a duel on horseback before he will allow California Joe and Bill to pass. The chief and Bill spur their horses into action. As Bill leans low in the saddle, the chief slides under his horse's neck as they pass each other. Shots ring in the air and both horses fall to the ground, dead. This scene was shot in cuts with trained falling horses used for the fall. In order to protect the horse's ears, cotton was placed in their ears and quarter loads were used in the guns. In another scene where Bill is in a gunfight with the Plumer boys, he shoots Will Plumer while on his horse and the horse falls. A trained falling horse was also used in this scene. In both scenes the ground was dug up and filled with sand so the horses would have a soft area in which to fall. When Bill follows Lonnigan and his men to the stables, he enters the barn shooting. The horses become excited, rearing up and prancing around as the men try to shoot their way out. For this scene, trained trick riding horses were used. Cotton was used to protect the horses ears and quarter loads used in the guns. In yet another scene, Bill is in a saloon and someone wants a demonstration of his marksmanship, so he shoots a shot glass off the top of a dog's head. This scene was shot in cuts. The dog and the actor were not on the set at the same time. The trainer merely placed a shot glass, made out of candy glass, on the dogs head. A squib, incased in silicone-to absorb the shock, was placed in the glass and it was mechanically set off by the stunt coordinator. Cotton was inserted in the dogs ears to muffle the sound. The dog was not frightened as he had been prepped for the scene. While in an opium den, Bill has a vision from his past where he is chasing a fox across a snowy prairie. This scene was accomplished with the use of two trainers. Trainer one released the fox as the other trainer cues the fox to come. In one scene there is a brawl going on in the streets and a horse rears up with his rider. This was a trained rearing horse. Only experienced wranglers and stunt people were used as riders for the horses in this scene.