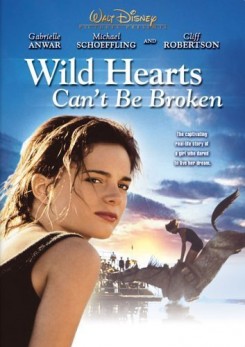 Wild Hearts Can't Be Broken is a true story that takes place during the Depression. Sonora Webster is a head-strong teenager who has been taken in by her aunt after her mother and father die. Feeling that Sonora is too difficult to handle, her aunt tells her that she is turning her over to the State. Sonora had seen a picture of a young model posing in front of a sign at the Steel Pier in Atlantic City that read "Where All Your Dreams Come True". This ad was to shape Sonora's future. Another ad also responsible for shaping her future, was one she saw in a local store which read, "Young girl needed to ride diving horses. Must be willing to travel. See Dr. W. F. Carver at the Savannah County Fair." These were the two thoughts that she took with her as she ran away from home in the middle of the night to become that young girl who would dive horses and travel. All did not go as smoothly as she would like when she found the fairgrounds and announced to Dr. Carver that she was there to become the next diving girl. Equally headstrong, Dr. Carver showed her the way out. However, determination prevails. Sonora strikes up a friendship with Al, Dr. Carver's son, who shows her around the tower where the horses dive. She is awestruck and knows that this is her destiny. Dr. Carver decides to give Sonora a job as a stable hand. She is finally given her chance to train to dive when Al brings home an unbroken horse (Lightning) and Dr. Carver is impressed with Sonora's ability to train him. Al, who never got along with his father, decides to leave the act. However, he and Sonora have developed a relationship which keeps him emotionally attached to the act during his absence. In the meanwhile, Sonora's dream continues to be to get to Atlantic City `where all your dreams come true'. When Marie, the regular diving girl, dislocates her shoulder, Sonora gets her chance to dive, which comes off without a hitch. Again impressed, Dr. Carver declares Sonora his second diving girl. Unable to get his mind off Sonora Al attempts to make her dreams come true by getting the act booked at the Steel Pier, in Atlantic City, just at the time the act is about to go under due to the depression and cancelled shows. He then returns home to be with Sonora and his father. Two things happen in Atlantic City. Because Lightning, Sonora's horse, has been ill, the other diving horse, Red Lips, has to be used for the dive. As Sonora mounts the ramp, Al proposes to her over the loud-speaker system. Then, Red Lips trips just before the dissent, causing him and Sonora to hit the water at an awkward angle. This causes Sonora's eyes to hemorrhage, eventually leading to her blindness. The rest of the story is about Sonora's determination to dive again, which she does for eleven years. For most of those years, the audience never knew she was blind.

There are three horse diving scenes in the picture. In this picture as in all other pictures, there were doubles trained for the picture. Six horses in all were in Wild Hearts Can't Be Broken. Four were trained to dive. While the real Sonora's horses dove forty feet, the horses that made the picture never dove over ten feet, which is the maximum that American Humane Association's Guildelines will allow. American Humane was on the compound for the full training period. Corky Randall, one of the most cautious horse wranglers in Hollywood, was hired by Pegusus Productions to train the horses. The horses were chosen very carefully and only horses that liked the water were used. Training was done very slowly by first seeing if the horses liked to swim. They were allowed initially to swim in the tank made for the picture. As training progressed, they were allowed to step off one foot into water, then two feet and so on until they had reached the ten foot maximum. The horses always jumped on their own. In order to achieve the forty foot height, a lot of Hollywood magic was used. The ten foot ramp was made to expand to thirty feet. A cage was designed to place at the top of the ramp so when the horses climbed thirty feet, they just walked into the cage. Footage of the assent was run back to back to make the assent appear long. Then a mechanical person on a mechanical horse, with the footage of the real audience all set against drawings of buildings in the background, made the jump appear to be forty feet. The jump is shown in cuts with only leaving the board and entering the water being the real horse jumps. The lead horse playing Lightning always made beautiful dives. However, the horse playing Redlips always twisted to the side when he jumped making it easy to fake a bad dive in the story. Add to this a shot of the horse turning his head (which was done in pick-up shots while the horse was standing on solid ground) and a close up shot of the horses hind legs (making it appear to be his front legs) stepping off a box, and you have a scene which appears like a trip and a disastrous fall into the water leaving Sonora blind. American Humane is generally opposed to equine diving acts so initially attempted to persuade the production company not to make the picture. However, our authority does not go beyond making sure that the animals are protected. We soon became aware of the company's total commitment to the safety of the horses. Caution and time was taken to choose the right horses and train them. Pegasus Productions conferred with American Humane throughout training, pre-production and production. There were no horses injured during the dive in either training or production and the horses seemed to be enjoying what they were doing. (The tank at the compound had to be blocked off when not in use because the horses and dogs on the ranch would run up and jump off on their own when there was no training being done.) All the other animal action was mild and achieved with hand signals. Not only was American Humane on the compound during all training, but was on the set everyday that animal action was being shot in California. John Freed, Director of the Greenville Humane Society, represented American Humane on the set during that portion the picture shot in South Carolina. Because of the way that the production company worked with American Humane and because of the precautions taken to protect the horses.