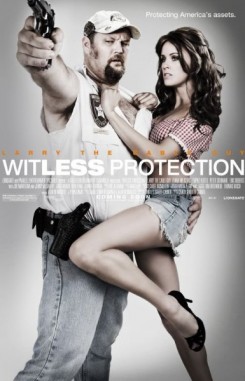 Deputy Larry Stalder (Larry the Cable Guy) thinks a woman is being kidnapped and takes her away from the FBI. She believes she is in protective custody, but Larry ends up saving her from the crooked agents.

A horse rears and shakes its head, as if agitated. Larry pets the horse and begins to unsaddle it when he sees a burr on the horse. Once he removes it, the horse appears to feel better. Later, an actor rides the horse out of the barn. The horse was accustomed to performing and being around people. A trainer stood off-camera and verbally cued the horse to rear and shake its head. Prop rubber burrs were placed between the thick blanket and the saddle, never touching the horse. The horse was rewarded with treats between takes. The actor was instructed on properly mounting the already saddled horse and riding it a few feet outside of the barn.

During the polo scene, a professional polo team with horses performed the action and doubled as some of the actors. The grounds were checked, safety meetings were held, and stuntmen and actors were given lessons by the polo team members on how to hold and swing their fake rubber mallets.

Scenes in which it looks like a polo ball is nearly or actually hitting a horse, a Nerf ball was used in filming and transformed into a polo ball in post-production. Whenever someone is knocked off a horse  during the game, a stunt rider doubled as the actor. Whenever it looks as if the horses collide with each other, mechanical horses were used. In the background, horses are tied to trailers during the polo match. The horses were placed on their marks while their handler stood nearby.

An airport guard has his bomb-sniffing dog sniff Larry’s boots. The dog then falls over, as if the smell has just killed it. Moments later, the dog is placed into a body bag and carried out. This scene was filmed in separate shots. A German shepherd was placed on a rubber mat. The boots were smeared with baby food to entice the dog. An off-screen trainer cued the dog to lie down and stay. The dog was then placed inside the body bag and told to stay as the trainer zipped it up. The dog was removed seconds later and replaced with a “dummy” dog made of rolled-up furniture pads.

Larry picks up a snake. He waves it near Madeleine (Ivana Milicevic) and it appears to bite him in the nose. A rubber snake was used for most of this scene. The actor was given instructions on proper snake handling and was handed the live snake right before filming began. After the actor briefly held the live snake to show the actress, it was replaced with the prop snake for the rest of the action.

Larry sets an opossum free and it scurries into the woods. A trainer put the opossum on its mark and released it. A trail of treats was placed on the ground where the opossum was to walk and a trainer was waiting with a crate to retrieve the animal.

On a farm, the FBI men drive their car to a screeching halt, jump out and chase Larry, who picks up a pig and runs through the barn and a pen with cattle in it. They chase him through the cattle, shooting their guns. Larry exits the cattle pen and runs to a pig pen. He enters the pig pen and shoos the pigs out. The film in this scene is sped up. An experienced stunt driver drove the car and the animals were placed a safe distance away from where the car stopped. Pigs were split into three different pens. All grounds were checked and water was sprayed on and near the pigs between takes to cool them and make mud. When the pigs were let out of the pen, off-screen trainers waved their arms and shooed them along. There were several places in the cattle pen where trainers hid to watch over the cows and help move them along during the scene. Larry grew up on a farm and is very knowledgeable about handling animals. All gunfire was pantomimed with prop guns and the sound was added later in post-production.

Due to limited resources or scheduling conflicts, American Humane did not monitor all of the snake action or any of the raccoon, beaver or iguana action.