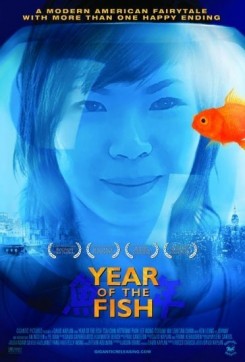 Year of the Fish

Ye Xian (An Nguyen) is sent to America to work off a family debt. When she finds out that the work is more than she bargained for, her only solace is befriending a magical koi fish. This modern day Cinderella story is set in New York's Chinatown.

Auntie Yaga (Randall Duk Kim) gives Ye Xian a small koi fish in a bag. Over the course of the film, the fish is seen swimming in the bag or in a fish bowl. It eventually grows so large it barely fits in the bowl. A wrangler gently placed the fish into the bag or bowl just before cameras began rolling and removed it from the bag or bowl at the end of each brief take. Several fish varying in size were used to represent the growing fish.

Mrs. Su (Tsai Chin) demands that Ye Xian get rid of the overgrown koi fish. She takes it to the city and puts it into a large fountain. This scene was filmed in separate shots. The fish was gently transferred to a plastic bucket and the bucket was placed at the edge of the fountain, with the actress,.The actress tipped the bucket to pour the water and fish into the fountain. The fish swam naturally while in the fountain and was retrieved with a net at the end of each take. The American Humane Certified Animal Safety Representative™ limited the number of takes to ensure the fish would not be stressed. The wrangler conditioned the water with an additive to dilute the level of chlorine in the fountain, and the koi was kept with oxygen and ice in between takes. When the actress visits the fish at the fountain and appears to pet it on the head, a puppet was used for the fish.

The film opens in a market place and a rat is seen running down the street. This animal was filmed in its natural environment. The bird in the birdcage at the grandmother's house was very comfortable in his own cage. The production used computer imaging to create the cockroach in Ye Xian's bedroom.