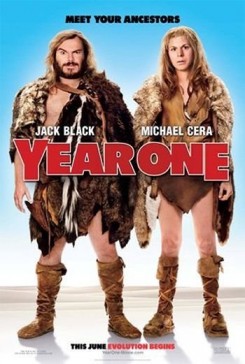 In the year 1, Zed (Jack Black) and Oh (Michael Cera) are inept hunters who are ostracized from their village and forced into the foreign, outside world. There, they run into biblical characters such as Cain, Abel and Abraham, and witness the destruction of the city of Sodom.

For scenes in which animals appeared, streets were closed off to traffic and all grounds were inspected for safety. Cast and crew members were introduced to the animals and instructed on their proper handling before filming began. Whenever animals are near each other, they were introduced to each other before filming began and given time to become comfortable with each other. Anytime animals, such as oxen, horses, cows, donkeys, sheep, camels and dogs, are seen in the background or near actors, trainers placed the animals on their marks and stood off-camera to cue the actions. The animals were accustomed to doing the actions they performed. For some scenes, some animals were allowed to graze or do whatever came naturally.

The camels' kneeling was a trained behavior that they were accustomed to. Whenever actors held or walked an animal, both the actors and the animals were well-rehearsed for the mild action. For scenes in which animals pull a cart, the animals were working animals accustomed to pulling carts and the carts were lightweight props made for the film. Off-camera trainers walked alongside the carts as a precaution. The scene in which several oxen pull a large cage carrying slaves was filmed in separate shots. There were only a few people in the cage when the oxen pulled it. In a separate shot, more people were added to the cage (for closer angles), and crew members pulled it. For scenes in which a donkey or horse is being ridden, the riders were either costumed trainers or experienced actors. Costumed trainers also stood nearby, on and off horseback.

The lightning that strikes Cain was a special effect added in post-production. Animals were kept a safe distance from fire and torches.

For scenes in which an animal is roasted on a spit or cooked on a stick, the animals were props. Production provided documentation that the boars' heads and animal pelts were also props.

While cows graze in a field, Zed (Jack Black) throws an arrow shaft (without the arrowhead) at one, which bounces off the cow, and then runs and jumps on the cow, causing it to buck him off. Trainers placed the cows on their marks and used hay to get them to graze naturally. The American Humane Certified Animal Safety Representative™ tested the arrow and had the crew members throw it at him to make sure it was painless. The well-rehearsed crew members then gently tossed the lightweight prop arrow (with no arrowhead) at a cow, which did not faze the animal. A stuntman gently jumped onto a well-rehearsed cow's back, which was then cued to move forward while the stuntman fell off in a choreographed fall to make it look like he was bucked.

A wild boar walks through the jungle and then is chased by villagers. Trainers released the boar into a sectioned-off area, which was secured and corralled with paneling. Trainers used buzzers, bait sticks and food bowls to get the boar to perform the action, and retrieved the boar immediately after the short scene. The boar was never chased — the men chasing the boar were filmed separately.

During the end credits, a man dressed in modern-day clothing has the snake around his neck, and he tosses it into the bush, picks it back up and stomps on it repeatedly. This was a rubber prop snake custom-made to serve as the python's "stand in."

When the cougar was on set, only necessary cast and crew members were allowed on set. A specially made ramp and platform were built for the cougar. Trainers cued the cougar to walk up the ramp to its mark on the platform on a tree branch. The cougar was supposed to jump down onto a landing pad, but it chose not to leave its tree branch platform, so the jumping was added in post-production. The animal was cued to growl.

For the very brief owl scene, a trainer placed the owl on its mark on a tree branch and retrieved it moments later. No other animals or actors were nearby. The hawk flying was filmed in separate shots. This hawk was trained to fly from one point to another in a free-flight, and it was equipped with a tether as a precaution. The hawk was then placed on the actor's arm. The actor wore a leather arm guard. The well-rehearsed actor walked a few feet and placed the hawk on its mark on a perch. For the very brief peacock scene, the bird was placed on its mark and cued to stay just long enough for the camera to film it for a moment.

In the open market, several animals are seen in the background, including a lion and tiger, which are being led on rope leads, and a monkey, which sits atop a person's shoulders. Costumed trainers served as the actors in this scene. The monkey was cued to stay, and the lion and tiger were cued to walk the short distance from one point to another and were given food rewards at their end mark. All other people and animals were kept a safe distance from these animals.

When the high priest asks Oh to oil his back, a monkey is briefly seen in the background. A costumed trainer held the monkey and walked from point A to point B for this brief and mild action.

Several horse-drawn chariots ride into town at a fast pace while the men riding them cut off people's heads. The ground was packed sand, and the experienced stuntmen drove the chariots about 200 feet. This well-rehearsed scene involved stunt drivers and experienced horses, which were accustomed to pulling chariots and running at a fast pace, close together. The actors carried prop weapons and pantomimed the beheading action.

When Zed and Oh are captive in the dungeon, rats walk on the ground and in the window. Trainers placed the rats on their marks and allowed them to roam freely in the enclosed room, retrieving them immediately after.