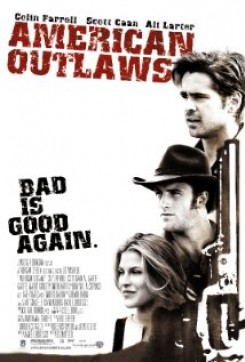 In this lighter version of well-chartered Western territory, Jesse James—played by Irish actor, Colin Farrell—leads a gang that robs banks, trains, and stagecoaches throughout the West from 1866 to 1881, becoming one of the era's most legendary bandits. Newcomer Scott Caan plays Cole Younger, who competed with Jesse for leadership of the gang, and Ali Larter plays Jesse's girlfriend, Zee Mimms.

A group of experienced horse wranglers and trainers spent months preparing their horses and cast members for the intense animal action in American Outlaws. While professional stunt-riders performed most of the intense horse action, all cast members that rode horses were required to take several weeks of riding lessons, and only the most skilled were allowed to ride during the more complex scenes. Lesser skilled riders were given extended lessons to improve their riding ability, and given roles as townspeople for jobs ranging from holding horse's reins to simple A to B riding. In addition, every scene was carefully choreographed and rehearsed, and several AHA representatives were stationed on the Texas set to confirm that all safety measures were in place.

In the film, plenty of gunfire and explosions seem to occur within close proximity to the horses, often appearing to frighten the animals. In fact, per AHA Guidelines, the guns were only filled with quarter loads of gunpowder to reduce the noise level and percussion of the shots, and earplugs were used for the horses to further protect them from the noise. All cannon-fire was simulated and explosions occurred only when the horses were over 400 feet away. Special Effects Coordinators ensured that the debris from the blasts would blow in the opposite direction of the animals. Green screens were also used to superimpose images of the animals in the foreground of explosion shots to make the horses appear closer to the blasts. Horses that seem disturbed by the noise were actually trained by wranglers to rear-up on cue.

Specially trained falling horses were used in two scenes in the film. The ground was dug-up and softened per AHA Guidelines and a veterinarian was on hand to examine the animals before and after the scenes. No animal was harmed.

All horse jumps were achieved with stunt-riders and experienced horses, ensuring the safety of both rider and animal. Extra precautions were in place for the scene requiring a horse and rider to jump through a glass window. The trick window was constructed of candy glass and balsa wood—a light, crumbly wood material designed to "give" when necessary. (Balsa wood is used throughout the film, allowing for the animals to easily break free from hitching posts in one scene, and is also used to construct jumping mounds.) A veterinarian examined the horse before and after the one-take stunt, and found that no harm occurred.

Before horses were allowed to gallop through a riverbed, the ground was carefully cleared of debris and rocks and paths were constructed for the horses on the river bottom. For riding next to the railroad tracks, sand was brought in to build up the bank next to the tracks to create secure footing for the horses.

In a dramatic moment, Jesse drives 100 horses through the town square to create a diversion so that he may rescue Cole, who's scheduled for hanging. Preparation for the scene included several weeks of rehearsals and training. Twenty-two wranglers and stunt-riders supervised the stampede from on and off-camera, while pick-up riders were stationed on the periphery of the path to catch any wandering horses. The speed of the horses was regulated by wranglers on horseback, to guide the animals in a curving path from one end of town to a gated holding corral located on the other side. The horses were rotated in groups and were allowed an hour of rest and refreshment for every hour that they worked. The streets of the western town were built almost 3 times as wide as usual to accommodate the number of horses that would ride through in this scene; an AHA rep on set estimated that the width of the street could fit 25 horses across, providing ample room for the horses to travel.

Despite all of the safety precautions, an unforeseen accident occurred when, during the last take on the last day of filming the stampede scene. When the accident occurred, the horse in question suddenly veered from the rest and headed toward the hitching post. Once there, he tried to jump the post and caused the fatal injury. The horse was impaled by the post and according to the monitoring vet, died approximately 30 seconds after impact. Work by AHA Field Representatives and veterinarians on the scene, and a subsequent accident review, have determined that all proper safety precautions were in place for shooting the scene. According to a review conducted by AHA headquarters:

AHA investigated the incident and concluded that since all proper Guidelines were in effect, there was nothing that could have been done to prevent the accident from occurring at that time. Since then, however, a new AHA Guideline has been created regarding stampedes and hitching rails to prevent this kind of tragic event from ever happening again.

"Throughout our 60 years protecting animals in film and television productions, American Humane has paid special attention to the safety of horses," Karen Goschen, Vice President, AHA's Western Regional Office. "Unfortunately, despite every safety precaution in place and representation from AHA on the set, a horse tragically died during filming of a stampede scene for the production 'American Outlaws.' This accident is unacceptable. Having conducted a follow-up review of the accident with the full cooperation of the producers and wranglers on set, we have strengthened our guidelines for the filming of such scenes."

While the Guidelines for the Safe Use of Animals in Filmed Media already outline safeguards to protect animals in stampede scenes, the new guidelines specifically address issues when stampede scenes are restricted to a certain path or enclosed area and near a cliff, hill or knoll. For a copy of AHA's complete guidelines and to see the new 2001 Addendum I – Horse Guideline Additions, go to Guidelines on the website - www.ahafilm.org.

"Our job is to do everything possible to protect animal actors – that includes insuring that safety precautions are in place, restricting or vetoing action that may cause risk to the animal, and continually looking for ways to improve the care animals receive throughout production," Goschen continued. "It's because of AHA's 60 years of protecting animals in film that the death of an animal on set is extremely rare. Yet, when it does happen, it's our job to learn from these accidents for the purpose of advancing safety."

"We appreciate the concern expressed by the production company and the crew of 'American Outlaws' during the accident review. Their full cooperation in light of a very tragic event will help more animals in the future. As a result of this review, we feel we can strengthen the protection animals receive by specifically addressing the movement of a large number of animals in a restricted area. I am confident the new guidelines regarding these types of stampede scenes will help that occur," Goschen concluded.