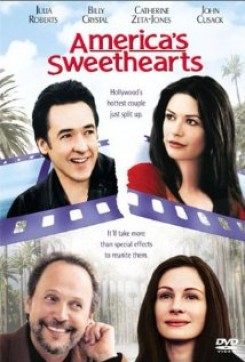 Eddie Thomas (Cusack) and Gwen Harrison (Zeta-Jones) were affectionately known as America's Sweethearts on and off the screen. Unfortunately, when their marriage ended so did their movie careers. A fast-talking publicist, Lee (Crystal), convinces the couple to reunite for a movie that will presumably reactivate their celebrity. When the print of their film doesn't show up at the press junket, Lee tries to divert the attention of the impatient journalists. He concocts the story of the couple's reunion, when in fact, Eddie is actually in love with his wife's sister who is also her assistant (Roberts) and Gwen is being wooed by a new beau.

Four Doberman Pinchers were on set to portray the dog in the film. The first time we see the dog it runs from Gwen's living room and it appears outside and seems to be attacking the window washer. The window washer was really the trainer in costume and had rehearsed this scene with all four of the dogs. The dog grabbed the back of the costume and pulled as the trainer pushed himself along the ground making it appear as though the dog was dragging him across the patio.

As Lee sits in a chair in Gwen's living room, the dog and Lee have a staring match. The trainer put the dog on its mark and used hand signals to get the dog to look in various directions, growl and bark. These shots were inserted into the film during post-production. After the dog and Lee stare each other down, we see back of the dog's head move towards Lee. The dog begins licking Lee's crotch as the publicist remains frozen in the chair. A tube was run down the actor's pants to the crotch area where it was connected to a syringe off camera. When the trainer depressed the plunger on the syringe, baby food was pushed through the tube to the eager dog waiting to enjoy the food treat.

At the end of the film, Lee lies on the bed and a growl is heard. We see the dog's head as Lee talks to it and then see the dog begin to lunge toward Lee. The dog's action was filmed separately from that of the actor with the trainer putting the dog on its mark and using hand signals to get the dog to achieve the action that was later inserted into the film.