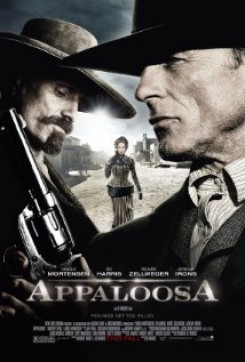 In 1882, Virgil Cole (Ed Harris) and Everett Hitch (Viggo Mortensen) are no-nonsense policemen hired to save a small Western town from the corrupt rule of a renegade tyrant and his violent posse. Their lives become complicated, though, when a seductive widow enters town.

For scenes in which the actors appear to shoot at or near horses, either the action was pantomimed (with no actual bullets) or powder blanks were used. At times when actors on horseback shot up into the air or away from horses, quarter loads of powder blanks were used. The particular animals used in this film had been around the sound of gunfire and were accustomed to it. Wranglers and stunt riders used various cues to get the horses to rear, prance or appear to be startled by gunfire. Whenever horses were tied to hitching posts or troughs or stood in an outdoor corral, they were secured by wranglers. Whenever horses ran on rugged terrain or up steep hills, they were accustomed to and comfortable with this well-rehearsed action. All actors were given riding lessons before filming began and were tested before being allowed to ride. Also, the lead actors who spent the most time on horseback were experienced riders, skilled at riding, mounting and dismounting.

For some of the scenes in which multiple horses are near each other, costumed wranglers and stunt riders were mixed in among the other well-rehearsed riders. For scenes in which teams of horses pull wagons or carriages, the drivers were experienced and the teams were familiar with each other and accustomed to the pulling action.

Anytime horses were near a campfire, it was a controlled flame that posed no risk to the animals. Dust whirling in the wind was a natural occurrence in the part of New Mexico where the movie was filmed — the horses considered this to be normal weather.

Whenever horses are near a train, the train was not moving and wranglers stood just off-camera. Whenever the train was seen moving, the horses were a safe distance from it. The horses were not startled by the sounds of the moving train. Any holes near the tracks were filled and packed, and trees were trimmed back.

Whenever Hitch (Viggo Mortensen) or Cole (Ed Harris) ride on horseback pulling a riderless mule or horse by a lead rope, the animal was a pack mule or horse accustomed to carrying equipment on its back, and the actors were rehearsed on how to handle the reins or rope and guide the animal.

Hitch and Cole ride their horses and guide a third riderless horse across a river in water up to the horses' shoulders. Later, several horses with riders stand along a riverbank as three other men on horseback wait on the other side of the river. After one horse rears, the three horses walk through the water and trot up the riverbed onto the shore to meet the others. Then, when Allie (Renée Zellweger) is held captive by Bragg's (Jeremy Irons) men, Hitch rides while pulling two riderless horses across an open field and into a brook. Much later, Hitch, on horseback, pulls Bragg's horse across the river and up a bank. For all water scenes, trained horses experienced in walking through moving water were used and a water safety team was in the water. The river authority lowered the water level and decreased the speed of flow upriver, near a dam. Wranglers walked through the water before filming to ensure that the current was weak and the footing was safe and found that the rocks in the brook were not too slippery or jagged. The horses were equipped with special shoes to grant them better footing.

When Cole appears to slap a horse on the rear with his hat to shoo it away, this was a light swat on the horse's rear that was well-choreographed to look harder than it was. The horse was actually cued to trot off and was not fazed by the gentle swatting action.

Several American Indians on horseback run in circles near each other and other horses. One man grabs Allie and forces her onto a horse. Then Cole and Hitch shoot a man off his horse and shoot a horse, which jerks its head and falls to the ground. Another horse falls and gets back up. Other horses prance around, appearing to be frightened. This scene involved well-rehearsed horses performing well-choreographed actions, including the head movement. Costumed stunt riders doubled for the riders of the horses that fell, pranced or were mounted in a way that appeared rough. The horses used in this scene were specially trained "falling horses" and "lay down horses" that fell on cue onto a soft pre-dug sand pit. Wranglers cued one of the fallen horses to get back up. The other fallen horse, which appeared to have died, was a prop. Any wounds or blood applied to the live horse were nontoxic, nonirritating special-effects makeup. The guns were props and the gunfire was a sound effect. These horses were not around real gunfire.

When Hitch, on horseback, carries a long spear and spins it around, the spear was a rubber and plastic prop that would have caused no harm to the horse had it accidentally touched the animal. The actor was well-rehearsed at twirling the spear and spun it more slowly than it appears in the film – the film was sped up in post-production.

Right after the shootout at the sheriff's building (with no horses around), Bragg exits the stables on horseback, galloping away as Hitch shoots at him. Quarter load powder blanks were shot. No real bullets were ever aimed at the horse. The action of Bragg riding away was well-choreographed and wranglers stood nearby.

A bull walks in front of Hitch and Cole. The owner of this Angus bull led the animal about 50 feet by a halter lead rope. A bull ring was on hand in case the bull became hard to handle, but it was not needed. The horses were accustomed to and unfazed by the bull.

A cougar sits atop a hill and watches the train go by below. One trainer released the cougar from its cage and two other trainers hid just off-camera, cueing the trained cougar to walk from point A to point B, giving the appearance of pacing, and then to stay on its mark at the top of the hill. The cougar was rewarded with food and was unfazed by the train noises. The animal was kept a safe distance from the train for this brief scene.

For the brief scene in which a dog is sitting on a porch, the trainer placed the dog in its position and cued it to stay.

Production provided documentation that the deer mounts and taxidermy animals on the walls were props.