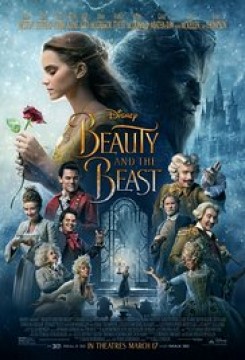 Beauty and the Beast

An adaptation of the famous fairy tale about a prince who was cursed to be a monster and the love story between him and a young peasant girl.

Throughout the film, we can see goats, chickens and other livestock farm animals milling about in the background. This mild action was achieved using one or more of the following methods: the animals were allowed to graze at liberty; they were attached to lead ropes (held by actors or tied to posts). This is the case when we see the actress in her small village walking around and singing and we see chickens, donkeys, goats in the background. Each pair of chickens had a water bowl and the trainers placed feed on the ground to keep them in place. After shooting the scene the chickens that were on the pathway were removed from the set and placed back in their crates. Likewise for the donkeys and goats, many of the trainers were in wardrobe and holding their animals by lead ropes. All animals were given shade and water between takes.

When we see the actress skip over the pond and we see a series of ducks in the water, the trainers released them into the pond. The pond was surrounded by several handlers in costume The handlers held long-handled nets to direct the ducks and also to catch them if needed.

In the scene where the horse’s hoof falls in the puddle and splashes the actors, on action the horse was then given the cue to paw the ground with his front leg. They then shot a separate scene of the water splashing on the actors.

In the scene where the actor gets on the carriage and drives it down a road, the cart was manually positioned on set and brakes were applied to the wheels. The trainers remained on the left side of horse, just out of shot and held him during filming.

In the scene where the donkey walks in a circle, churning the laundry, the trainers placed a harness on a donkey and brought him to set. On action the trainer walked the donkey in a circle.

When the father’s cart is struck by lighting and the horse whinnies and pulls back, then starts racing down the road, this sequence was filmed in separate segments. First the trainers used cues to have the horse pull back and whinny. The horse was not pulling a cart in this scene. Then they used a sports cart which had an engine to double as the cart. The cart was manually positioned and the trainer rigged the horse up to the cart. A stunt driver sat in cart and the trainer stood in front of the horse. A wind FX machine was used during filming, as was a fake snow machine. On action, the stuntman drove the cart from an A to B trajectory. Since the cart was motorized the horse hardly had to pull the cart. The tree that falls due to lightning was fake and never came close to the horse.

The wolves were created by FX. So the horse was never chased by wolves, they just filmed the horse running a simple A to B trajectory. In the same sequence where the father character falls off the rock and onto the horse, they had a stuntman fall into the horses’ saddle. The stuntman and the horse practiced this sequence many times prior to filming.

In the scene where the actor rides the horse towards the snowy castle, the castle itself was created by CGI and the scene was filmed on stage. The snowy path was cleared and created with fake, non-toxic snow. When the Beast approaches and the horse escapes, the pathway for the horse to run was lined with rubber matting. The horse rehearsed this trajectory several times before shooting the scene.

The actress who plays Belle was a good rider and had a lot of experience riding horses. However, when we see her riding the horse at a gallop they used a stunt rider for those scenes.

In the scene where Belle rides a horse and is chased by the wolves into a snowy bank, the scene was shot on stage, with fake snow. Rubber matting was placed on grounds. When the wolves surround the horse on the ice and it looks like the ice is cracking, rubber matting covered the area of the artificial frozen lake that was to be used with horse and cart. The horse was also wearing rubber shoes.

In the scene where we see three men on the cart being led by the horse, the cart was positioned by trainers and the actors were shown how to drive cart. In the scene where we see the two men get on the cart and drive the cart off, the horse was never attached to the cart in that scene, they just got a close-up of men on cart. In that same scene when we see the owl sitting on the branch, prior to shooting the scene the trainer placed a tie down on the owl and attached the end to the log. Smoke machines were placed in a safe distance from the owl. As soon as they called cut, the trainer retrieved the owl and placed him back in his crate.

In the scene where the men in the village square leave to find the beast with horses, the scene was choreographed and set up very carefully prior to filming. Stunt riders and trainers were in costume holding the reins of their own horses. After shooting the scene all the horses and dogs were removed from set and brought back to the holding areas.

The Asylum wagon was harnessed to two horses and everything was checked by trainers. Whenever we see men with torches, fire officers were present, and they were extinguished after each take.

When the mob approaches the castle with horses and dogs, all horses were shod with rubber shoes. The scene was shot on stage. All animals were given food and water between takes.