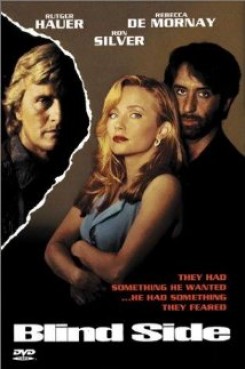 Blind Side is a suspenseful thriller describing a couple's terror as they are stalked by a stranger who knows a deep dark secret the pair are trying desperately to keep. Doug and Lynn Kaine are a young couple who are very much in love and are expecting their first child. They have gone down to Mexico for a little vacation and to see about setting up another branch of their furniture store. They head back for California with Lynn driving the lonely, narrow road that evening, straining to see through the patches of fog that occasionally blow across her path. All of a sudden a man staggers out of one of the fog clouds, right in front of the car. Lynn slams on the breaks, but it is too late. She hits the man, throwing him into the car windshield, killing him. As they examine the man they realize that this man was a police officer. They are terrified, as they know what happens to people who are arrested in Mexico, especially for murdering a police officer. Much to Lynn's aversion, Doug convinces her that they must flee the scene and not tell anyone of this horrible accident. They return home harboring this terrible secret, and try to go about their daily routine as if nothing has happened. All's well until one day when a stranger shows up at their door, Jake Shell. Shell is an ominous man, who throws around hints that he may know about their accident in Mexico. The Kaine's try everything to get rid of Shell, even giving into black- mail, but Shell is relentless. He wants much more. He has decided that he is going to become part of the Kaine family, in every way. He moves into the Kaine residence and his reign of terror begins. The couple are now at Shell's mercy, or are they?

Animal action is minimal. It is limited to one scene in which a road block has been set up at a border inspection area to catch drug smugglers. A border patrol dog is seen walking around a vehicle sniffing for dope. The dog supposedly finds some drugs, barks, and the suspect is arrested. This dog was not a real a border patrol dog. The dog, lead by his trainer, who played the part of the border patrol officer, was not actually sniffing for drugs but rather sniffing out a hot dog that the actor in the car was holding for him. The dog then barked when given verbal commands to "speak". A burro hitched to a cart is also visible in the background of this scene.