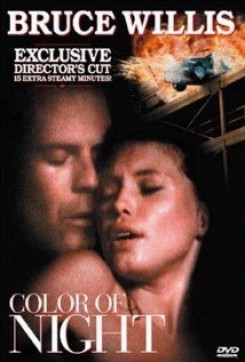 Color of Night is a suspenseful thriller involving murder, deceit and betrayal. Dr. Bill Copa leaves Manhattan for Los Angeles to stay with his friend, Dr. Bob Moore, after one of his patients, Michelle, commits suicide. Both Bill and Bob are psychiatrists. Bill feels responsible for the woman's death as he had harsh words with her and she flung herself out of his office window, landing on the pavement 15 stories below. When Bill arrives at Dr. Moore's office, Bob gets Bill to attend a Monday night group session in hopes that Bill can give him insight on the patients in this group of five. Dr. Moore has been receiving death threats and believes that it is one of the patients in the group. Four days later Dr. Moore is indeed stabbed to death in his office. Bill takes over the Monday night session in hopes of discovering who the murderer is. After interviewing each of the patients, Bill does discover who the killer is, but it is not at all whom he suspected. Now he must try to stop this maniac from harming any more innocent people.

In one scene Bill goes to fetch the mail from the mailbox. When he opens the door of the mailbox, a rattlesnake sticks his head out, scaring Bill into falling over backwards. Bill slowly crawls out of the snake's striking distance and grabs a nearby shovel. He strikes the mailbox, causing the snake to fly out, land on the ground and slither away. This scene was shot in several cuts. Both a real and a fake snake were used. The real snake was placed in the mailbox by his handler just prior to this scene being filmed and the handler is actually the one who opens the mailbox, revealing the snake. When Bill strikes the mailbox causing the snake to fly out, a fake rubber snake was used in place of the real snake. The real snake was then placed on the ground by his trainer and filmed when you see the snake slithering away. In an opening scene, Michelle is seen getting ready to go to her doctor's appointment. She is feverishly looking for some undetermined object, tearing the cushions off her couch, which her cat happens to be resting on. When she begins to remove the cushions, the cat dismisses himself. The cat had merely followed verbal and hand commands from his trainer. In the scene when Michelle flings herself out of the window, she lands on the pavement in front of a policeman on horseback. Her landing causes the horse to rear up. A trained rearing horse was used for this brief scene. Other background and atmosphere animal scenes included pigeons flying, a horse being ridden in a park and a cat being held and petted.