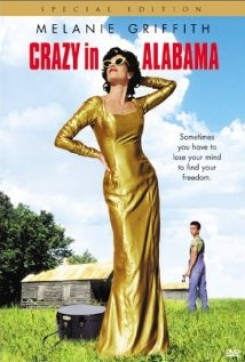 Crazy In Alabama is a film about a woman that kills her husband and keeps his head in a hatbox and keeps it with her to make him see that she could succeed on her own.

There is a scene where Lucille arrives at a Hollywood party carrying her hatbox. The host has three small dogs that greet the guest at the door. The dogs see and sense something different about the hatbox and they start to dance around it on their hind legs. Later, while the hatbox is sitting on a bed in a guestroom, the dogs attack the box. When the bedroom door is opened the dogs run out of the room. The trainers placed the dogs on their mark and cued them with verbal and hand commands with a food reward. For the segment where the dogs attack the hatbox, food was placed inside and the trainers gave the dogs a command "get it", "dig it". In another scene, two boys are lying on their backs at the side of a pool and some ants are crawling around next to them on the concrete. One boy supposedly smashes one of the ants with his thumb. This scene was accomplished using real ants and chocolate sprinkles. The real ants were used to establish the shot and replaced with the chocolate sprinkles for the segment of the boy smashing the ant under his thumb. In yet another scene, one of the boys is playing with a junebug and it turns onto it's stomach and the boy rubs it with his finger. Other animal action consists of a lizard sitting on a plant, horse and carriage traveling from A to B down a city street, dogs on leashes with policeman, and police on horse back during a riot scene.