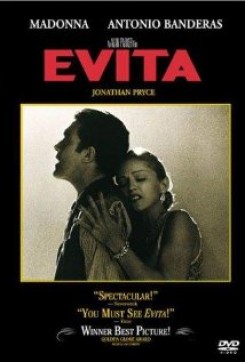 Evita is a musical feature film about Eva Peron, a lower class woman and her rise to power in Argentina.

There are several scenes early in the film where horses and farm animals are seen in the background at an area village. The horses are either pulling a carriage, hitched to a post, or being ridden by area locals. There are a few other scenes where members of the military or police are seen on horses for crowd control. In one crowd control scene a horse is seen rearing.