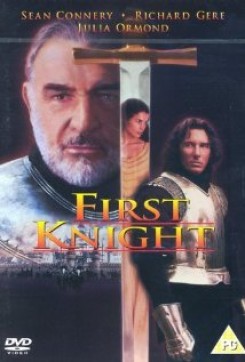 First Knight is a story about Camelot as seen through the eyes of Lady Guinevere and Lancelot. Guinevere's land is being ravished by her evil neighbor, Malagant, and his band of knights. He goes from one village to the next, looting and burning their homes. After every raid the people come to her asking for help and protection. She decides to accept a proposal of marriage from King Arthur of Camelot in order to assure her people's safety. In the midst of her journey to marry Arthur, Guinevere is attacked by soldiers from Malagant, her enemy. She escapes capture by jumping from the carriage and runs through the forest. Guinevere is saved by a stranger, Lancelot, and he returns her to her escort but not before stealing a kiss with promises of more in the future. She explains that it will never happen because she is to be married soon, never to see him again. He informs her that she will kiss him again and before the next summer's eve. Guinevere does in fact see him again, on the day of her wedding. He runs the gauntlet, a game of contest and becomes the only one to ever make it to the end. The prize is a kiss from King Arthur's new bride. Guinevere begs Lancelot with pleading eyes not to take the kiss and so instead he kisses her hand before the cheering crowd. Arthur is amazed by his performance and asks him to become one of his knights, but Lancelot graciously refuses. Guinevere is kidnapped by Malagant and Lancelot rescues her and returns her safely to Arthur. Arthur is indebted to Lancelot and offers him the greatest reward he has which is a knighthood and seat at the Roundtable. Guinevere does not want him to accept because of the great passion felt between the two and the fear of someone getting hurt if he stays. But Lancelot accepts anyway and when he is knighted, news reaches Guinevere that her home has been taken, and everyone sets out to avenge her honor. Upon arriving back at Camelot, Lancelot realizes he cannot torture himself any longer by being so close but yet so far away from his beloved Guinevere. He tells her of his decision to leave and during a passionate parting kiss, Arthur enters the room. Arthur feels that King and country have been betrayed and therefore tries them both for treason. During their trial the gates to the city are left open. His enemy, Malagant, sneaks in and a battle takes place. Arthur is mortally wounded, but lives long enough to find out justice is done and his land is safe once again. Lancelot, Guinevere and the Knights of the Roundtable place Arthur's body on a small boat in the water, lighting it with torches. They send him off in a blaze of flames across the water on his journey to the heavens.

Horses are ridden throughout. In a scene at the beginning of the film, Guinevere's village in Leonesse is attacked by Malagant, and as they are riding out of the village he torches the buildings. Only those horses accustomed to working around fire were used. A special lens was used when filming scenes involving fire which made the riders and the horses look as if they were much closer to the fire than they actually were. For added realism horses were filmed in front of a blue screen. Then later the shot was superimposed with a scene of the fire and actors in the background. In yet another scene, word reaches Guinevere that her home and lands have been attacked, Arthur and his knights mount up for battle against their enemy, Malagant. The battle takes place outside the walls of Leonesse. In this particular scene there are two horse falls. Only trained falling horses were used. To protect the horses, a pit was dug and filled with sand, grass, and other material to make a soft bed for the horses to fall in. Again a special lens was used when filming these battles scenes to make the horses look as if they were much closer to the battle and each other than they actually were. There are many scenes where we see sheep in the background being tended by a sheepherder. In one scene when Lancelot is at a village, goats are also seen tied to the sides of cottages and oxen are pulling carts. A dog is also seen.