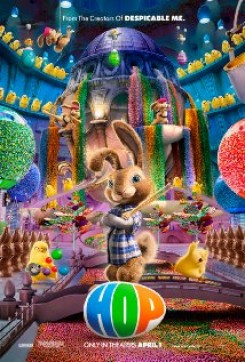 After a driver hits the Easter Bunny, he must make things better by saving the holiday.

During a brief scene in China, a man holds a pig on a leash and it eats from a trough in the background. A trainer doubled as the actor for this scene. The trough had pig food in it.

Two dogs chase Fred across the front lawn and finally catch up to him, knock him over, and begin to bite his arms. This was filmed in separate shots. A trainer released the dogs once the actor had a good head start. The dogs were cued to run to another trainer, who stood waiting to retrieve them. A trainer doubled as the actor when the dogs appear to attack Fred and bite his arms. The suit he wore was well-padded, and the dogs were cued to grab the trainers' arms. All grounds were checked ahead of time to make sure it was safe for the dogs to run on. This action was well-rehearsed before filming.

A dog runs and jumps over hedges in the yard. A trainer cued the dog to jump over the hedges, which were very low to the ground. The dog was very well-rehearsed for this action, and all grounds were checked ahead of time.

Two dogs are asleep as the pink beret bunnies pass by and pet them. The trainer placed the dogs on their marks and then had the cast and crew remain very quiet until the dogs actually fell asleep. The computer-generated imagery (CGI) rabbits were added later, in post-production.

A man walking with two large dogs at his side passes by Fred on a path in the woods. A trainer cued the dogs to walk with the actor, who had treats in his pocket to keep the dogs close by.

A hawk in flight was stock footage purchased by the production.

Two dogs are asleep as the pink beret bunnies pass by and pet them. The trainer placed the During a talent show, a man dances with a monkey. The monkey was placed on its mark near the actor. A trainer stood just off camera and cued the monkey to jump up and down and move like it was dancing.

People standing in line to audition for a talent show include a man with a capuchin monkey on his back, a magician with two doves in a cage, a cowboy with a dog on a leash, a woman holding a small dog, and another woman holding a cage with a cat inside. The trainer doubled as the actor with the monkey and all the owners of the other animals doubled as the actors. All the animals were kept a safe distance away from each other and were either held or in cages. Trainers stood off camera to supervise the action.