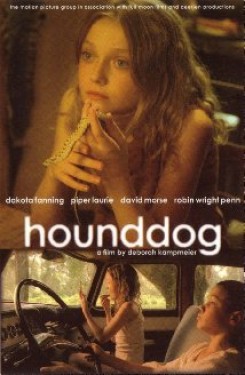 Lewellen (Dakota Fanning) lives with her grandma and alcoholic father. Precocious and sexually curious, she escapes from her worries by singing Elvis Presley songs and hopes to meet him someday.

Throughout the film, snakes climb on branches near water. These snakes were placed on real branches and filmed doing whatever came naturally, including slithering into the water and swimming to shore. Trainers stood nearby to retrieve the snakes afterwards.

Lewellen holds a snake while talking to Buddy (Cody Hanford) and then hands the snake to the boy, who holds it. Later, as Lewellen holds a snake, Charles (Afemo Omilami) milks it and skins a second snake while they talk. The trainer conducted safety meetings with the actors and crew members before filming began and everyone was instructed on handling the snakes. The sets were secured and limited to only necessary actors and crew members. A trainer handed the actor a snake right before filming began and then stood just off-camera to retrieve the snake again. Production provided documentation that the dead snakes used for the skinning and milking scenes were purchased already dead. For the milking, water was injected into the salivary glands of the dead snake to make it appear as if venom was coming out. Production also provided receipts for the dead snakes in jars that appear in the background at Charles' house. For the live snakes in terrariums at Charles' house, trainers inspected the terrariums ahead of time to make sure they were safe and secure for the snakes, which were placed inside before filming began.

As Lewellen sleeps in her bed one night, several snakes slither in the open window and onto her bed. Charles enters the room and carries her out. A few snakes remain on Charles and Lewellen as he carries her. This scene was filmed in separate shots. Furniture pads were placed all over the floor to protect the snakes in case they dropped to the ground. The bed was placed right under the window and a trainer hid outside, guiding the snakes in through the window. Other trainers placed some snakes directly onto the bed right before filming began. The actress was well-rehearsed with these nonpoisonous snakes. Only necessary cast and crew members were allowed on set, and all were as quiet and still as possible. The actor was very careful when he lifted the actress up from the bed and carried her away. Once the actress was in the actor's arms, a trainer placed a few snakes on the actors, who then walked through the house. The trainers retrieved the snakes as soon as the scene was over.

As Lewellen approaches the house, she sees her Grandma's car run over a large snake in the driveway. Her dad stands nearby, and when he reaches down to pick up the snake, it strikes at him and bites him. This was done in separate shots. The production provided documentation for the snake in the driveway, which was purchased already dead. The snake lunging and biting the actor was achieved with computer-generated imagery.

As Lewellen runs through a field, her dog runs ahead of her and then waits for her by the door to the house. As Lewellen enters the house, she tells the dog "no" and the dog backs up and waits outside. The dog stands by the screen door outside and howls, waiting to come in. When the dog tries to open the door with its nose, Lewellen yells for it to stop, and the dog walks away from the door and out of camera range. This scene was filmed in separate shots. Trainers placed the dog on a mark and then stood off-camera, cueing the dog to run to the house and stay on the porch. An off-screen trainer then cued the dog to howl and open the door with its nose.

The dog enters the chicken coop and barks at the birds. The next morning, the dog is lying inside the chicken coop surrounded by feathers, with a dead, bloody bird nearby. A trainer placed a turkey in the back of the coop on a small shelf and then hid under the shelf. One end of a lightweight monofilament line was attached to the turkey's leg and the other end to a stake in the ground. The dog and the turkey were introduced to each other before filming began and the scene was rehearsed several times to make sure the animals were comfortable with the action, which they were. Trainers also placed other chickens and turkeys around the coop. Then a trainer brought the dog inside the coop, and the trainer hiding under the turkey called the dog to come to him. The trainer used hand signals to get the dog to walk to the turkey and bark. Another trainer threw some straw near the turkey's feet to make it move around and appear as if the dog was attacking it. For the last part of the scene, a trainer placed pillow feathers on and near the dog's mark and then placed the dog in a "down/stay" position. Production provided documentation that the dead chicken and blood were fake. When Lewellen's dad walks toward the chicken coop with a rifle, we hear a gunshot and a dog squeal. Her dad then walks out carrying a burlap sack, and when he sets it down, the dog's paws fall out of the sack, as if it is dead. This scene was filmed in separate shots. The sack the actor carried actually contained sand bags. A trainer then placed the dog into a "down/stay" position on the ground and gently placed the burlap sack on top of the dog for a few moments as the actress delivered her lines.

As Grandma (Piper Laurie) sits on the porch, she tosses lit firecrackers into the nearby garden. When they explode, two birds fly up and out of the garden. The well-rehearsed birds were equipped with monofilament lines, which were attached to soft leather bands on their legs, and then placed inside special "launching" devices. They were then released, not ejected, from the launchers so that they would be guided to fly in a certain direction for about 10 feet and land on a branch. Trainers retrieved the birds right after.

Horses graze around the barn in the background. These horses lived at this location and were filmed at liberty in their natural environment.

While talking to Lewellen, Charles holds a horse's reins as the horse walks in circles. Charles stops the horse and hands the reins to Lewellen, then moments later, retrieves the reins and leads the horse into the barn. The actors were introduced to the horse and instructed on its proper handling. The wrangler handed the reins to the actor right before filming and stood just off-camera. Once the horse was inside the barn, a waiting wrangler retrieved it. All grounds were checked ahead of time for safety. Only necessary cast and crew were allowed on set. Wranglers on foot and horseback surrounded the area as a safety precaution. Later, Charles leads a horse out of the barn quickly, smacking it on the rear and causing it to run out of camera range. A trainer handed the horse to the actor, who had been instructed on how to lightly tap the horse's behind, and retrieved the horse once it ran out of frame.

A car stops, and someone inside sets a puppy on the side of the road and drives off. Lewellen sees the puppy walking by the side of the road and picks it up and carries it home. This scene was done in separate shots. The puppy was not in the moving vehicle. Once the car stopped, a trainer handed the puppy to the actress in the car, who was instructed on the handling of the dog before filming began. The actress carefully set the dog on the ground where there were treats already scattered, and the trainer hid behind a nearby tree and cued the puppy to stay as the car drove away slowly. Fanning was also instructed on the handling of the puppy before filming began and carefully held it as she walked and delivered her lines.

Small lights were used for the lightning bugs seen in the film.

Although Hounddog shows the "No animals were harmed" language at the end of the film, American Humane's Film and Television Unit did not issue an official disclaimer to the film before the end credits were completed. This production did not give American Humane a pre-release screening of the film, which is one of the requirements for issuing the disclaimer. However, an American Humane post-production staff member screened the film in the theater after it had opened and ultimately deemed the film worthy of the "No animals were harmed"® disclaimer.