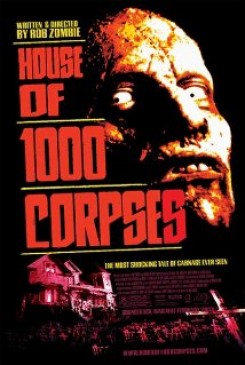 Two young couples take a misguided tour onto the back roads of America in search of a local legend known as Dr. Satan. When they find themselves stranded, they spend the night in an old dark house inhabited by a bizarre family of psychotics. Murder, cannibalism and satanic rituals are just a few of the horrors that await these unsuspecting victims.

In the beginning of the film, there is a scene where a car is being gassed up at Captain Spaulding's Monster Museum/ Gasoline and Fried Chicken store. An older man stands in front of the car at the pump and feeds a dog, which sits at his feet and eats what the man is tossing to it. A trainer put the dog on its mark and gave the actor some of the dog's favorite treats to toss. The dog remained on his spot even after the camera was turned off!

Toward the end of the film at the creepy house, during the massacre that is set to music, there are flashes of all sorts of images on the screen. Two cops and another character are brutally murdered, as well as some others, while an upbeat song is playing in the background. In this gruesome sequence there are images that flash on the screen. One image is of an old home movie with one of the characters, Denise, and her family celebrating Christmas. Denise is holding a small dog and waving one of its paws at the camera. This was filmed separately and inserted into the film in postproduction. The actress and the dog were introduced to each other before filming began so they were comfortable together. A trainer handed the dog to the actress and stood just off camera.

The family dog is laying in the driveway as a car pulls up and stops just short of the dog, but the animal never moves. This scene was filmed in front of a green screen. A trainer put the dog on its mark and the car was added later in postproduction.

Later in the film, Denise's father and a police officer come to the house to investigate. As they approach the front door, they pass a cage with two chickens inside. They push open the door and the dog who is tied up on a chain, lunges at them and barks and growls. A trainer put the two chickens in the cage and stood off camera. One trainer stood off camera holding the dog on a chain, while another trainer stood in front of the dog using hand signals to cue the dog to lunge, bark and growl.

All of the stuffed animals that appeared on the shelves, walls, jars, or any other place at the House of 1,000 Corpses and Captain Spaulding 's Monster Museum/ Gasoline and Fried Chicken store were supplied by a busy prop department.