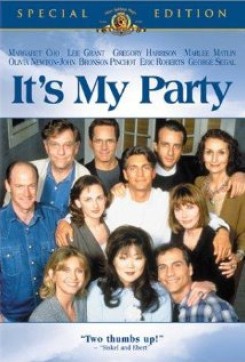 It's My Party is a story about Nick Stark, a successful young architect, who is gay and recently diagnosed with AIDS. In a series of flashbacks, the film depicts his life and his relationship with his lover, Brandon, a successful director who abandons Nick after learning of his illness. Soon after their break-up, Nick learns that he has PML, a form of AIDS where lesions develop on the brain, causing pain, suffering and death within a few weeks. Nick comes to the conclusion that he does not want to put himself and his family through that kind of suffering, so he decides to end his life himself. However, before taking an overdose of sleeping pills, he throws a farewell party inviting all of his friends and family. Before the party, people come and go throughout the day telling him good-bye. During this time, everyone is talking about old times and Brandon's name keeps coming up. One of the guests takes it upon himself to call Brandon and inform him about the party and Nick's plans. Brandon comes to the house that night with many other well wishers, but he is not as welcome as the rest. After leaving, Brandon realizes that no matter how anyone feels about him, including Nick, he must be with his ex-lover the next day. The day arrives and only those closest to Nick spend the day with him. Nick takes this time to give special items away to family and friends, including his dog, Houdini. Brandon arrives, with a golden retriever, Opala, a pet the two lovers had shared while together. Brandon wants the three of them to be together one last time. As the day progresses, Nick finds himself spending time with Brandon talking about special events they had shared, including a horseback riding excursion.. Before the time arrives for Nick to take the sleeping pills, he and Brandon have reconciled, enabling Nick to leave this life with dignity while holding the hand of his most beloved friend and lover.

The animal action is minimal with the use of two dogs and two horses. In one scene, Nick is startled by the alarm and stumbles over Houdini as he gets out of bed. For this scene, the trainer merely placed the dog on his mark and the actor faked stumbling over the dog. In one flashback scene, we see Nick and Brandon, at the time they were living together, riding two horses along some beach front property. Then in another scene, before his death Nick shows Brandon where he now keeps the horses. The two horses are seen standing behind an outside corral. For both of these scenes, the horses were provided by the director and one of the actors. The actor, Eric Roberts, rode his own horse and the second actor rode the horse owned by the director. The day before Nick's suicide, a large number of friends gather at his home. Houdini, Nick's dog, is seen several times throughout the party. In one scene, Houdini is sitting in the lap of one of Nick's friends while Nick informs the man how to care for the dog after his death. In another scene, the dog is on the front porch sitting with his paws up in a begging position and then rolls onto his side. Houdini is also seen in several other scenes being carried by an actor, lying on the floor or couch, and jumping onto an actors lap. For all of these scenes, the trainer used verbal commands to cue the dog. When Brandon brings Opala to the party, the dog is seen getting out of the car on a leash and walked to the door. In other scenes throughout the day, he is seen lying outside the horses coral while Nick and Brandon converse, and lying on the kitchen or livingroom floor. For the scene when Opala is on his leash with the actor, the trainer merely handed the actor the leash and using verbal commands told the dog to "go with." For all other scenes the trainer merely placed the dog on his mark and used verbal commands.