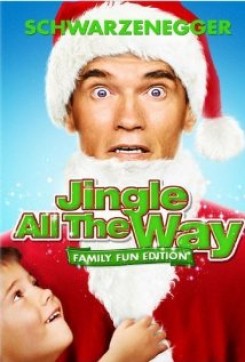 Jingle All The Way

Jingle All The Way is a film about Howard, a workaholic mattress manufacturer who waits to the last minute to get his son the most popular toy of the season, Turbo Man. Howard finds out that he must face many vicious last minute shoppers, like himself, in his quest to find a Turbo Man. However, nothing prepared him for the demented postal worker that he must fight, literally, at every turn when he hears of a possible Turbo Man in existence. In the meantime, his son is very disappointed because he thinks his dad is going to miss the Christmas parade. After facing many obstacles in the course of the day, Howard finally obtains the Turbo Man, however, the way he achieves it is a surprise to everyone, even to himself.

There is a scene where Howard sees Ted, his neighbor, walking across the front yard with a reindeer on a leash. When Howard reaches out his hand to pet the reindeer, the deer growls and snaps at his hand as if to bite him. The reindeer remained on a leash at all times. The trainer cued the reindeer with a buzzer and food as reward. An animatronic deer head was used for the facial expressions the deer is seen making. In another scene, Howard is trying to sneak out of his neighbor's house through the back door. Upon exiting out the door he comes face to face with the reindeer. The deer snarls at Howard before chasing him through the house and knocking over a wiseman's head. Howard closes the door leading into the study and the deer supposedly hits his antlers on the closed door. A few minutes later a crash is heard and the reindeer is seen standing in front of the door with a hole in the middle. He supposedly broke through the door. Howard, upset, hits the deer in the head and the deer falls over onto the floor. Trainer #1 releases the deer to run from A to B, from the kitchen to the living room. Trainer #2 is waiting at point B with a bucket of food. When the wiseman's head is seen falling, a special effects man pulled a monofilament string attached to the figure, pulling it away from the deer. When Howard turns quickly and shuts the study doors, the trainer is holding the deer by the antlers for the close up shot. A fake deer head was used for the shot of the deer crashing into the doors and when Howard supposedly hits the deer in the head. An animatronic deer head was used for all close up shots of the deer's many different facial expressions. There is another scene where Howard and the deer are seen outside of his son's clubhouse drinking beer. When the deer is seen drinking beer out of a bowl, he is actually drinking apple juice. Other animal action consists of a German shepherd seen at a warehouse on a leash and the reindeer in a front yard being petted by some children.