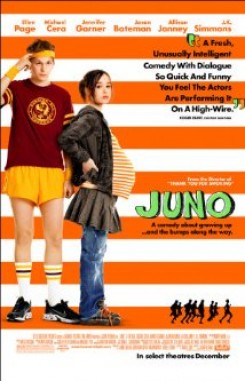 When Juno (Ellen Page), a sharp-tongued sixteen-year-old, discovers she is pregnant by her best friend, classmate Paulie Bleeker (Michael Cera), she decides to carry the baby to term. Through an ad, she meets a picture-perfect yuppie couple in wealthy suburbia who wants to adopt her child, and she begins her humorous journey of self-discovery.

In the opening sequence, a dog barks on a leash in a yard. For this, trainers attached a harnessed dog named Boomer to a chain, which was attached to a bush. Two trainers stood just off-camera, cuing the dog to growl, bark and look in certain directions. Bren (Allison Janney) holds Weimaraner puppies in her lap as Juno (Page) hops onto her bike and rides past. For this scene, the actress showered the puppies with kisses and attention, and held them securely in her arms so they would not accidentally get in front of the bike. Trainers stood nearby. The puppies were rewarded with affection and food. Cast and crew members were instructed on the handling of the pups before filming began. The aquarium was owned and maintained by a private party who lived in the house used for the location. Due to limited resources and/or late notification, American Humane did not monitor the rabbit action.