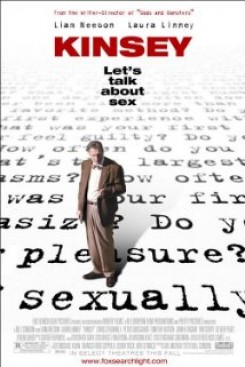 Liam Neeson stars as Dr. Alfred Kinsey, the man who changed American culture forever in 1948 with his book Sexual Behavior in the Human Male. Asking thousands of people about the most intimate aspects of their lives, Kinsey sparked one of the most intense cultural debates of the past century — a debate that rages on today.

One scene features a pair of birds sitting on a low tree branch in a New York City park. Two blue parakeets and two multi-colored parakeets were on call for this brief shot. One of the birds had its wings clipped, and the trainer taped the second bird's wings so that if either parakeet decided to take flight, they wouldn't travel very far. Grips from the production held a blanket under the branch as a safety precaution, and the prop master stood off camera with a net in case the birds strayed from the set.

In one scene, a cage containing two rats sits on a counter in the laboratory. A trainer put the two brown rats in the cage and the rodents behaved naturally as the camera rolled.

In the beginning of the film, a child sits on the grass drawing and the camera pans the area to shots of an owl, a squirrel on a tree branch, and a bird feeding her babies in a nest. Later, the child looks through binoculars at a bird on a branch. When Alfred proposes to Clara in the woods, the camera cuts to shots of a deer and a raccoon. Production purchased these images as stock footage and inserted them into the film.

The film's final credits contain video footage of various animals mating. This amusing footage is courtesy of the Kinsey Institute for Sex Research.

Producers submitted receipts from a biological supply company for the pinned insect specimens and the slides and photos that appear in some of Kinsey's classes.