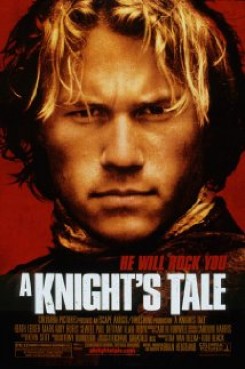 A Knight's Tale is a rock n roll romp through 14th Century chivalry and chicanery. A common squire named William Thatcher (Heath Ledger) assumes the identity of his dead master knowing that only nobility was allowed to compete at jousting competitions. William aspires to win counterfeit aristocratic standing along with some gold. Disguised in the armour of the deceased knight, he fights to transform his destiny. His cohorts consist of two varlets named Roland (Mark Addy) and Wat (Alan Tuduk) and an oft-naked gambler, i.e. loser, named Geoff Chaucer (Paul Bettany). Yes, the Chaucer, but during the undocumented lost years before his writing career took off.

This rag-tag band of upwardly mobile medieval imposters follow their dream making the rounds of the jousting competitions. William is determined: "We need to be reborn, like a phoenix rising from the ashes." And so his coat of arms is born, the games begin and rock music accompanies the irreverent and raucous quest. Changing his identity from a thatcher's son to Sir Ulrich von Lichtenstein of Gelderland, he becomes legendary on the jousting circuit. In keeping with the meteoric rise of many of the rock and sports stars of the 21st Century, William finds that reinventing himself cannot completely obliterate who he really is. Challenged in love and battle, he manages to change his stars, rock his world and discover the meaning of nobility.

Jousting scenes are plentiful throughout the film, since this is William's competition of choice. By the 14th Century, medieval games were a popular form of entertainment for nobility and commoners throughout Europe. Charging horses, dressed out in equine armour, carried lance-weilding knights toward victory, sometimes humiliation and often death. Many of the horses used in the film's jousting scenes were trained falling and rearing horses. These horses are also used in present day medieval expositions throughout Europe. The horses are conditioned to wear the armour, bear the weight of actors in their costume armour and race toward each other at great speed with only a low fence between them. When the knight's lance makes contact with the armour of the opposing knight, debris from the broken weapon flies everywhere and often one of the knights is knocked off his horse entirely.

Per production, the horses armour was made of a form of plastic, plus leather, as was the armour for the actors. Some of the armour for the actors had pieces that were made of a light-weight steel. The lances were made out of a combination of wood and light balsa wood. To make the splintering effect upon contact look more dramatic, the hollow forward portion of the lance was filled with dry spaghetti. Horse armour included a faceplate that ran down the nose area with a form of eye blinker built in to protect against the flying splinters. All the "hits" were rehearsed to happen behind the horses' heads above the saddle.

AHA learned from production and equine handlers that there was a two-month training period for the horses prior to shooting. Training and conditioning continued throughout the four-month long filming schedule. There was a specially constructed practice area in which the horses were trained everyday. Trained rearing and falling horses were used in particular scenes that called for this action. During production, a fake horse was also used for some of the riding sequences where a knight is seen being forcefully hit by a lance.

In one scene, there is a fateful fall that brings the horse down hard, breaking through the dividing fence and landing on its side. The production detailed the preparation for this scene which was carefully choreographed. A specially trained falling horse traveled to the location from France to do the stunt. The ground was dug up where the fall was to take place and filled with a combination of hay and foam then covered with sand and grass to match the surrounding turf. The barrier was constructed from a foam material that would not create hazard or splinters on impact.

Throughout production a veterinarian made spot checks of the horses and other background animals. Per the vet reports, "there were no serious injuries, illnesses and not even deaths of any animal used for the filming." AHA was told that on one occasion, a horse suffered a minor cut from actor's leg armour that had been damaged. The cut was immediately doctored and the armour removed and repaired. There was also an instance with a horse that ran into the central railing by mistake. The animal was uninjured, as was the rider.

Filmed on location in Prague, A Knight's Tale employed horses and animals from France and the Czech Republic. Although AHA's Film and Television Unit was not on set to monitor the action, we have screened the film and requested explanations for how animal action was achieved along with reports regarding the general care of the animals. Based on the reports from production, the producer, crew-members and the attending veterinarian, we are rating the film "Believed Acceptable."