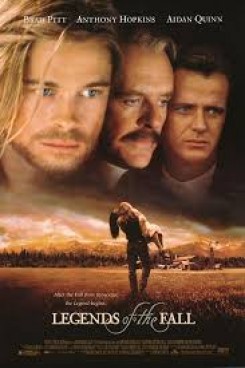 Legends of the Fall

Legends of the Fall is a turn-of-the-century western, spanning twenty years, told by an old Indian in voice-over narration about mystical Tristan, who supposedly lives by what becomes legendary to others. However, as the story unfolds, pitting brother against brother and father against son, he comes off as being more wild and uncompromising than mystical. Finally, tormented by his "inner demons", namely guilt he can not cope with and a broken heart, he reverts to old-fashioned Indian ways to exact revenge on his wrong-doers and salvage what he can of his family.

Animals are used throughout this movie, notably horses. In addition to the usual riding scenes, including Indians on horseback and settlers and townsfolk on horses and wagons, there are more action-oriented scenes such as where two actors on horseback drive a herd of cattle, a rider herds a group of wild horses running through a meadow into a corral, a horse and rider run up to the edge of a cliff, (this was done in cuts using a trick camera lens) a rider tries to ride a bronc and is thrown, Calgary soldiers and their horses fall from gunfire and explosions during battle and a rider on horseback leads an accompanying pack mule that carries a dead (fake) deer.

There are many scenes with dogs in the background and performing simple actions such as in an early scene a porter at the train station walks a dog on a leash and then hands it over to it's owner. In other scenes, dogs walk and run with Indians and settlers and a puppy frolics.

Some other scenes include a girl holding her pet rodent at the dinner table and some pack mules carrying crates of beer.

There are some scenes depicting the killing of animals and dead animals. In all instances fake animals were used. There is a scene supposedly showing a dead Zebra in the process of being cut open, with the guts being removed. This is a rather quick shot, shown from a distance. In another scene, a calf, supposedly caught in barbed wire, is so injured as to warrant being put out of his misery. Tristan supposedly shoots it. This was done in cuts and the shooting is not actually shown, only the pulling of the trigger.

There are some action scenes involving a grizzly bear. In one of the film's opening scenes, the bear growls at Tristan, as a boy, together with his dog. After the bear continues to growl, Tristan runs in front of the bear. The bear slashes at the boy with his claws and teeth, causing him injury. The boy then stabs the bear in one of his paws, causing it to run away. This scene was shot in cuts and the bear and dog were never actually together. A fake dog was used for the wide shots.

After that, an Indian gives the young Tristan a leather pouch with a bear claw. Later in the film, the griszzly comes back, walking and growling, then walks away again. Finally, in the last scene on the film, the bear attacks Tristan, an old man, killing him.

The Calgary Humane Society was on set during filming. The animals were not harmed. Fake knife and stage blood were used for the scene where young Tristan stabs the bear's paw. This, and all other animal action scenes were simulated and shot in cuts. Two vets were on the set for the protection of the animals.